[Credit: Paramount Pictures]  Hello Nokia phone fans, we’re back with another trip down memory lane inspired by the 10 Year Challenge.

Hello Nokia phone fans, we’re back with another trip down memory lane inspired by the 10 Year Challenge. We’ve all heard about the famous banana phone appearing in The Matrix, but where else have Nokia phones popped up in pop culture?

More than just a brand that offers cutting-edge design and pushes the mobile phone industry forward, Nokia phones have appeared on our screens more times than we can count. With this in mind, here’s a brief history of where the Nokia name has made a mark on Hollywood.

An early example of Nokia technology saw Danny Glover pick up a Mobira Talkman in Lethal Weapon. When he wasn’t fighting drug traffickers in Los Angeles, Glover’s Roger Murtaugh was making calls on the supersized phone. Probably the most famous Nokia phone to feature on our screens was the Nokia 8110 in The Matrix. The futuristic action movie featured a modified version of the Nokia 8110, aka banana phone and was used by Keanu Reeves. The Nokia 8110 has become one of Nokia’s most iconic models, which is exactly why we selected it to join our Classics family with the New Nokia 8110.

At the turn of the century, Nokia worked hand in hand with McG’s Charlie’s Angels. Cameron Diaz, Lucy Liu, and Drew Barrymore all helped promote the petite handset while the titular Angels worked hard to save the world. When the phone was launched, it even came with customized Charlie’s Angels branding. 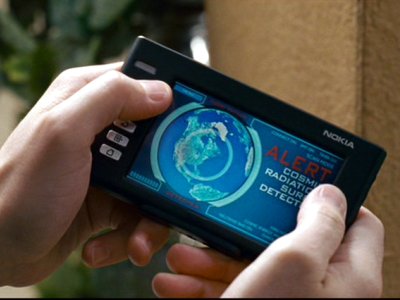 You could barely move in 2008’s The Dark Knight without coming across Nokia phones.  A prototype version of the Nokia 5800 XpressMusic was used by Bruce Wayne, while elsewhere, everyone from Morgan Freeman’s Lucius Fox to Gary Oldman’s Commissioner Gordon picked up a Nokia handset.

That iconic Nokia ringtone can be heard in J.J. Abrams’ Star Trek reboot. Chris Pine took on the role of James T. Kirk and when behind the wheel during a high-speed chase, the unmistakable sound of Francisco Tárrega’s “Gran Vals” -- albeit a futuristic version -- can be heard.

As the long-awaited sequel to Tron, 2010’s Tron: Legacy featured Garrett Hedlund as the lead and a de-aged Jeff Bridges. When Hedlund’s Sam Flynn went in search of his missing father, he used a Nokia N8 to bypass the security systems.

When the Transformers movies were still being led by Shia LaBeouf, the Nokia X7 had an impressive cameo in the third movie. Nokia even held an exclusive premiere of Transformers 3: Dark of the Moon to help promote the Nokia N7.

When Zack Snyder tried to kickstart Warner Bros.’ DC Extended Universe, an exclusive partnership with Nokia meant the brand appeared all over the superhero blockbuster. There was a special app created for the movie, limited edition Man of Steel covers for the Nokia Lumia 925, and Nokia was a big presence at the movie’s world premiere in New York.

Now you know where to find some of these classic Nokia handsets, you can go back and see for yourselves. Did you know Nokia phones were in so many movies and shows? Let us know in the comments below.