Greetings, after the update to android pie in my nokia 5 I decided to do a full factory reset and start the phone like new.

user1514092702503
✭✭  /  February 2019
Greetings, after the update to android pie in my nokia 5 I decided to do a full factory reset and start the phone like new.
Everything went well and I knew I would lose everything in my sd card which was set as internal storage, I backed up everything.

After restoring and formatting the SD card to use again as internal storage I noticed that the default storage manager shows both storage, back in 8.1 they were merged as one. I though it was weird but nice.

The android storage manager can see both storages, but windows and a 3rd party app (asus file manager can only see one storage)

The customer support was awful and I want to share it here because I can`t believe it even after experiencing it.(did not fix the problem).

I will be pasting cropped images from the chat, that is the only way I have to copy it fully. 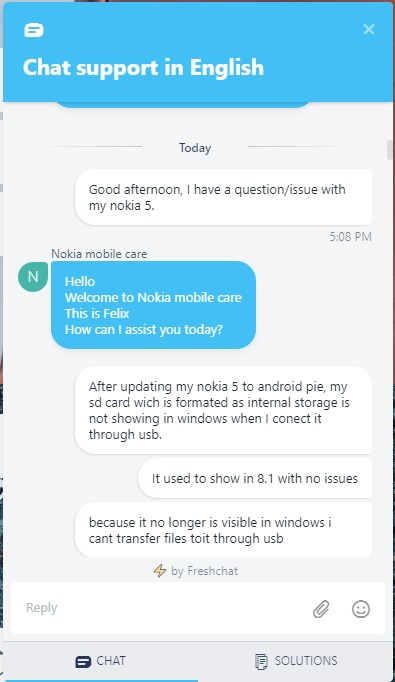 Up to this pint everything is ok, but then. 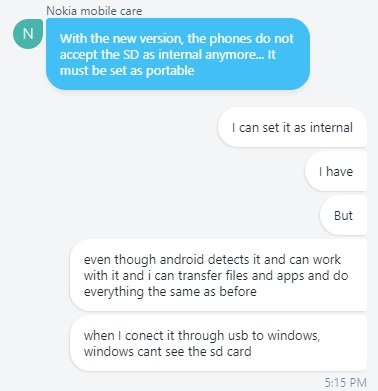 First comment that told me something was a lie, I have the SD card set as internal, I have apps there and it works fine, but apparently
I cant set it even if I did just minutes ago.(while writing this I discovered that this was a problem discussed in the forums for 6.1 and other models in pie beta, but why would a customer support representative use the forums as fact?) 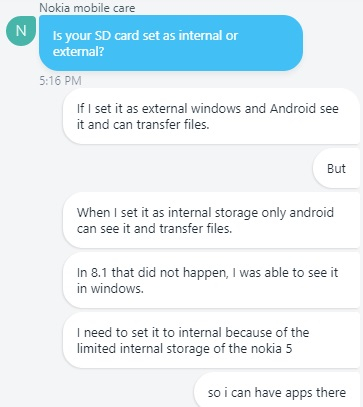 I just told him it was set as internal but fine.... 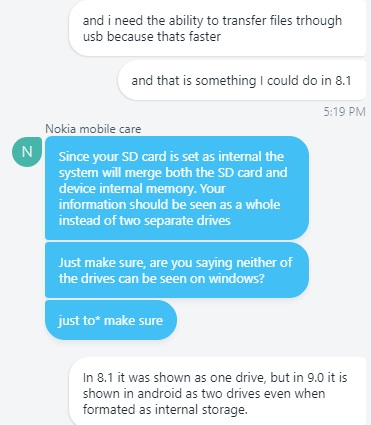 Here lies the problem, he is explaining it as if it was 8.1, not 9. At this point I started to worry. 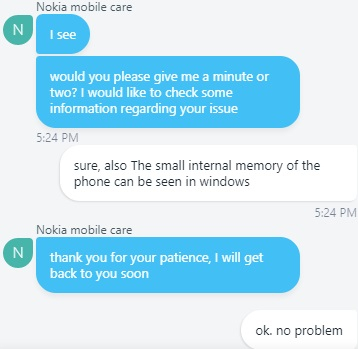 Ok maybe he got caught off guard, although pie has been out for a long time on other models. 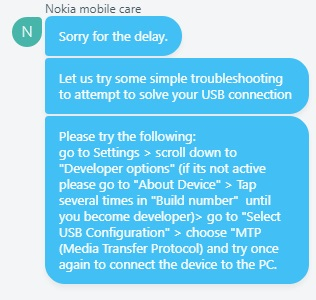 Again this is for 8.1 not 9.0 also mtp does not exist as such in 9.0 now this is annoying and I am not closer to resolving the issue.
After telling him where those options are in 9.0 and that my problem was ``reversed´´ ( now I can see SD card but not the internal storage after reformatting and restarting the phone). He told me to change the default usb configuration to transfer files which makes no sense because in 9.0 you select that in the quick menu, also selecting file transfer as default is risky for the phone.

After that solved nothing, he suggested I reinstall the mtp drivers, I did and of course It did nothing because windows was not the issue.
He asked for a screen cap of how windows see the storage. 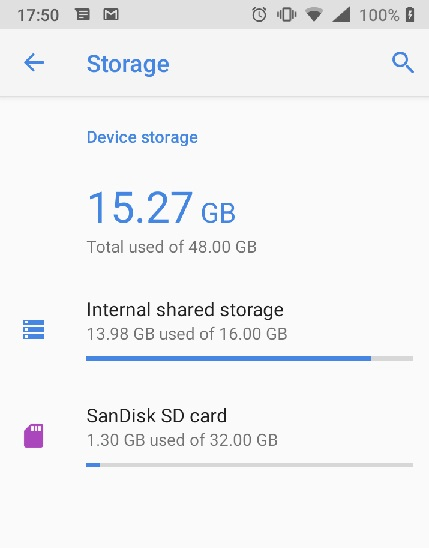 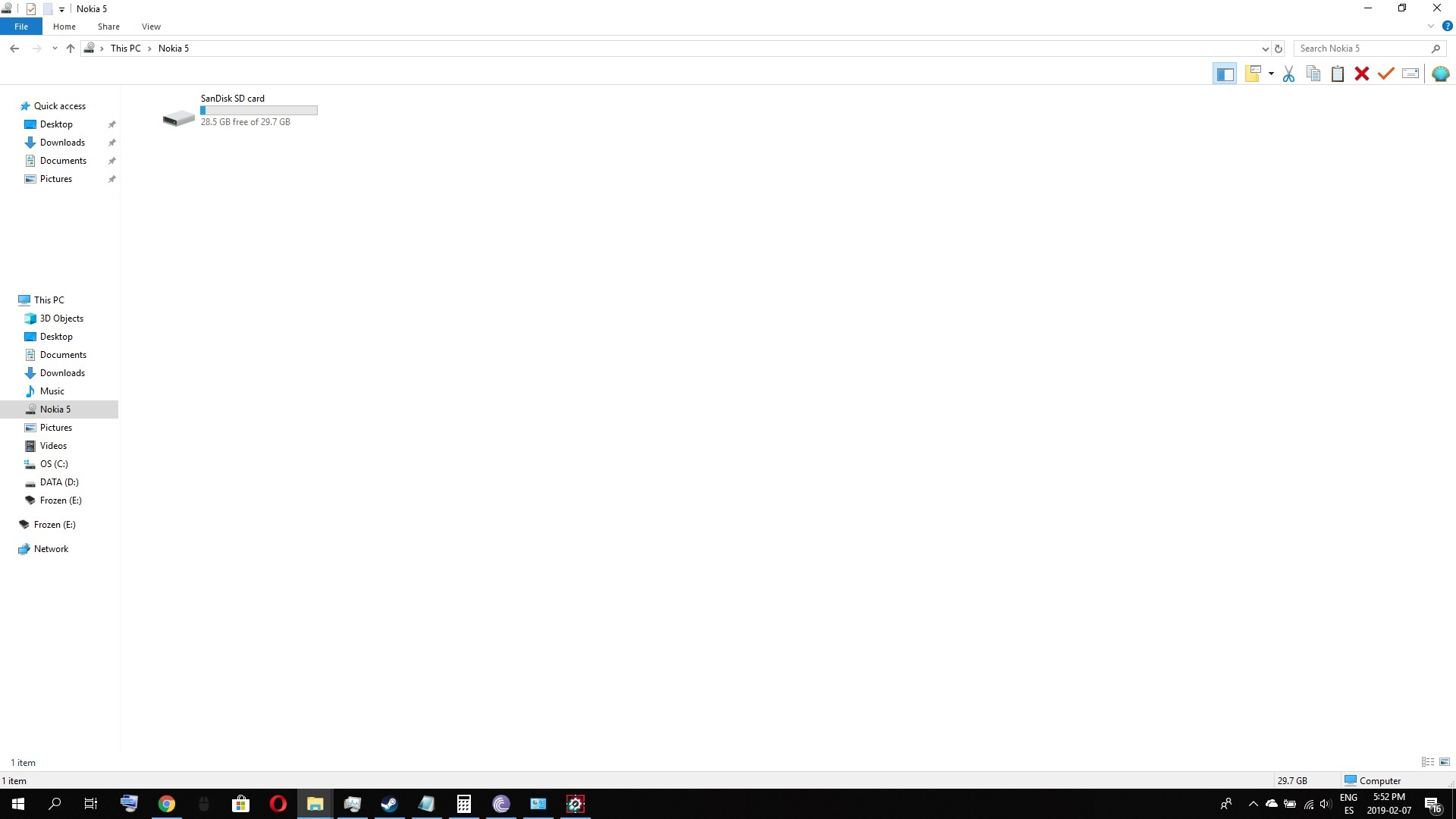 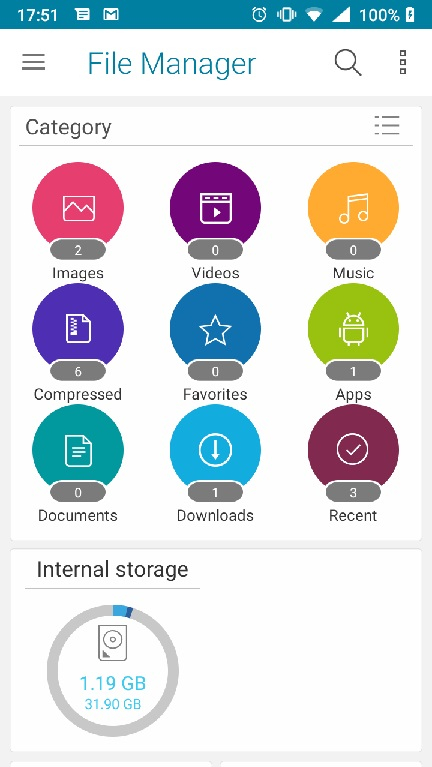 This 3rd party app (asus file manager) has the same issue as windows, which means that android has a problem, not windows.
At this point I don`t know If this person understands what I am telling him, but it gets even worse. 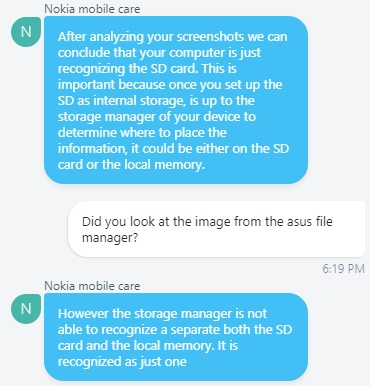 Again he says he ``analyzed´´ the screenshots, maybe that means not looking at them, since you can see that the sd card is being shown to both the file manager and windows, but the internal storage is not.
Still he is talking as if this was android 8.1 and not 9.0..... 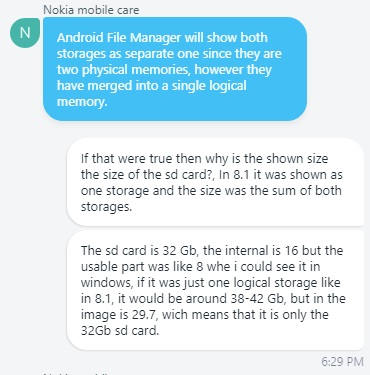 As we can see customer support has absolutely no idea what he is talking about or even has looked at the pictures with attention.
And the response to me saying the values is just the cherry on top: 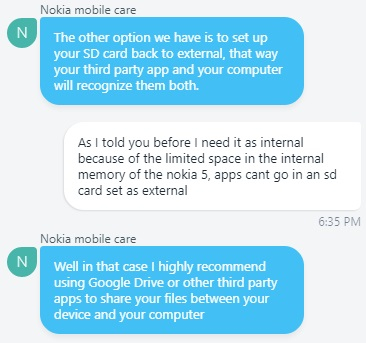 At this point it is obvious customer support doesn't care, the first thing I said was that I needed to set it as internal storage to put apps there, did he even read what I wrote? Also google drive... seriously does he even understand how phones work, and how useful it is to transfer files through a physical cable?

At this point I was equally angry and amazed at how ridiculous this was and then I read again his claim that sd cards as internal storage were not supported in android pie anymore, the after a quick google search turns out that the first result is a post about that problem in an early version on the nokia 6.1... seriously, there is no source, except that, if that was an android limit there would be some results after the search but nothing.
So I asked for his source. 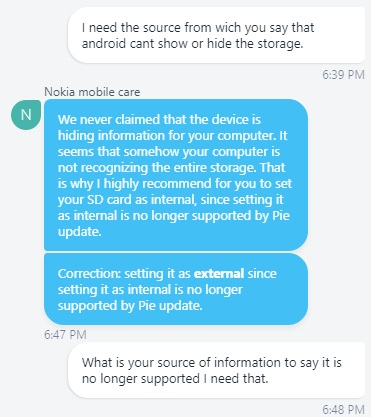 If he is claiming that android pie is not supporting a feature, then the least would be a link to a press release or something that says that no? 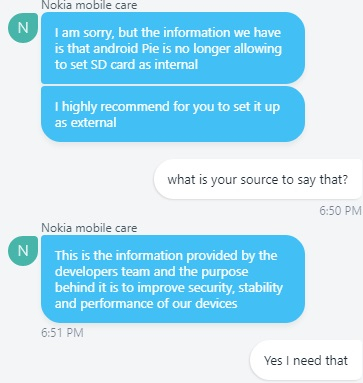 So it seems like he is just pulling the info out of nowhere because he says it is not allowed even though I can do it, and again recommends to set it as external, and if I do that then I have almost no space for apps. 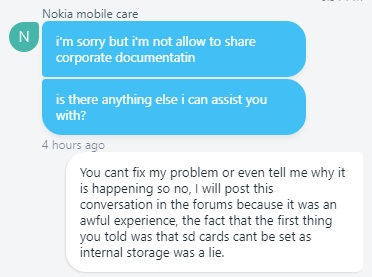 After this he continued to recommend using google drive and set it as external storage.....

And so I am posting this on the forum to show how bad the customer service is in case you need help in the future.


Pd: I know itis a very long post even though I trimmed the unimportant parts.