Hi&#13;everyone! A month ago I was lucky to be present at HMD's launch of five new phones for 2019, including the amazing Nokia 8 PureView.

A month ago I was lucky to be present at HMD's launch of five new phones for 2019, including the amazing Nokia 8 PureView. This post is my memories of that great event. I already posted loads of photos in my "live" thread for the event, which you can find here: https://community.phones.nokia.com/discussion/43498/what-im-experiencing-in-barcelona-live-from-mwc/p1
The launch event was amazing. Together with @EnjoyLogy, @Francesco Bacchini, @radu and @TommiS we met @maria.03 at the hotel which they'd booked for us to stay in. It was just up the hill from the Sagrada Familia, so a great location for photographs! We arrived at the venue for the launch event, Utopia126: http://www.utopia126.com/espacio and were quickly whisked away into a side room by @edo where we met three people who won the competition which Konsta Punkka ran on his Instagram account. We were all told very seriously that whatever we saw or heard in that room was to stay in that room until after the announcements had been made. I cannot stress how serious this message was - it was like the success or failure of the company was riding on us keeping a secret!
Together we all waited there for... who? I think he was referred to as a VIP whilst we were waiting... and then he came in: @juho!
He walked in with five phones in his hands! Put them down on the table and walked around to greet us all one by one - we were definitely made to feel welcome. Juho introduced us all to the new phones one by one. It was really cool to be seeing these new models before anyone else in the public. I liked all of them except the 3.2 - maybe it's because this model was in black, maybe it's because it was huge, but it just wasn't my cup of tea. The others though were cool. The 210 with 2.5G was a phone I could definitely see my parents loving (they don't care for smartphones) and looks really modern and different. The 1 plus was great with that red, textured and rubberised cover and made me yearn for a small smartphone again. The 4.2 in pink sand was the best looking of the lot and very pocketable - it somehow managed to look small even though it's about the same size as a Sirocco! The Google Assistant buttons on the 3.2 and 4.2 phones was a nice touch, but personally I was disappointed that it can't be remapped. I also prefer the rounded notch to the angular one on the phones from last year.
Then came the one we'd all been waiting for (and expecting for more than half a year thanks to all the leakers! in contrast the previous 4 were something of a surprise). The 9 PureView. It really is a cool looking smartphone. Juho gave us all the details (although some I must have misunderstood, e.g. SD card support...) and basically told us everything which you've already heard and read so I won't repeat it. We all waited patiently to get our hands on it, to feel for ourselves how it felt. However the thing I will probably remember most is Radu's reaction - his eyes almost popped out of his head when he saw it! I wish I'd been allowed to take pictures....
...speaking of which, there was some sort of camera crew in the room who filmed a bunch of stuff and took loads of photos, but I've not seen anything published about that. Anyone?
Juho then had to go to make final preparations for the event. We went out into the venue with Maria just as the first guests were starting to arrive. The halls were like an art gallery, covered with large prints of photos which had been taken with the 9PV by Konsta Punkka, Tuomas Harjumaaskola and others. All great, and to my eye difficult to tell they'd not been taken with a DSLR with a telephoto lens! Drinks, nibbles, snacks, all were yummy. The hall soon filled up and we made our way into the theatre for the show. You can watch the recording of the show livestream on Youtube so I won't tell you what happened, you can see for yourself: 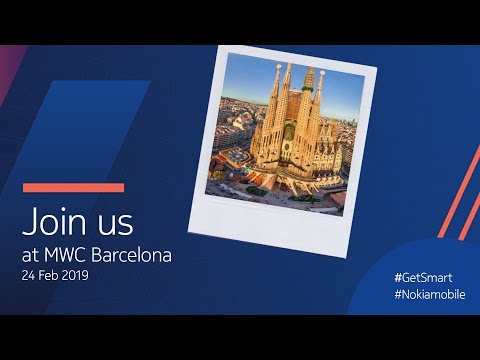 PS - we were all sat in the front two rows on the left side of the stage, so we're in the middle of the picture as the video starts

A few notes from the show:
After the show the whole crowd squeezed through the doors at the back into the demo area, fun! Here there was a stall for each phone model, with several phones for the crowds to play with on each stall. The rest of the crowd were all media AFAIK so they were busy making videos, taking photos, recording interviews, etc. Everywhere was really crowded so we went past it all and to... the bar!

On the way we past the room dedicated to ZEISS and the Google Assistant clowns! I'll talk about ZEISS in another post but the assistant clowns are worth mentioning again: Google had got people dressed up like this all over MWC but at HMD's event was the first time we saw them. They were good fun and keen to talk to us about the Google Assistant, even if they didn't know entirely all the ways the new button could be used... but they soon learnt

The food was all really fun, tapas style, really tasty but nothing compared to the drinks and sweets! These were all from Finland! Beer and Lonkeros (pre-mixed gin and tonics) plus some tasty chocolate sweets - I only know all this because Tommi told me, he of course instantly recognised all these things. It was really nice touch.
Together we all hung out together, chatting, eating, drinking, until the crowds had died down in the demo area (and got bigger in the party area!) then went back in for a play with the phones and a chat with the HMD staff there who were all really keen to talk to us, even though they must have said the same thing hundreds of times already! I learnt some really interesting things which I'll share in another post.
After a few hours our group gradually left the event venue. However, I still hadn't had my fill of phones! I spent so long there that I found myself caught up in the second show of the night! It turns out the HMD did two shows: one for the media, and one for their channel partners, e.g. retailers and mobile networks. The people from the second show didn't spend very long at all looking at the phones, they already knew it all and went straight to the party!
In fact I spent so long off looking at the phones and talking to the HMD team that Maria thought I'd left without saying goodbye! In the end I think I stayed until the very end of the party as all the HMD team were getting on to a coach as I left in a taxi.
Tagged:
1