A few days ago I got my hands on the Nokia 7.2 and I thought of comparing its camera and sharing the comparison shots here on the forum for all of you to check it out.

Kartik Gada
Super User  /  October 2019 edited October 2019
A few days ago I got my hands on the Nokia 7.2 and I thought of comparing its camera and sharing the comparison shots here on the forum for all of you to check it out. In case you missed it, I already shared the >>Nokia 7.2 Indoor light camera comparison<< which you can check out. 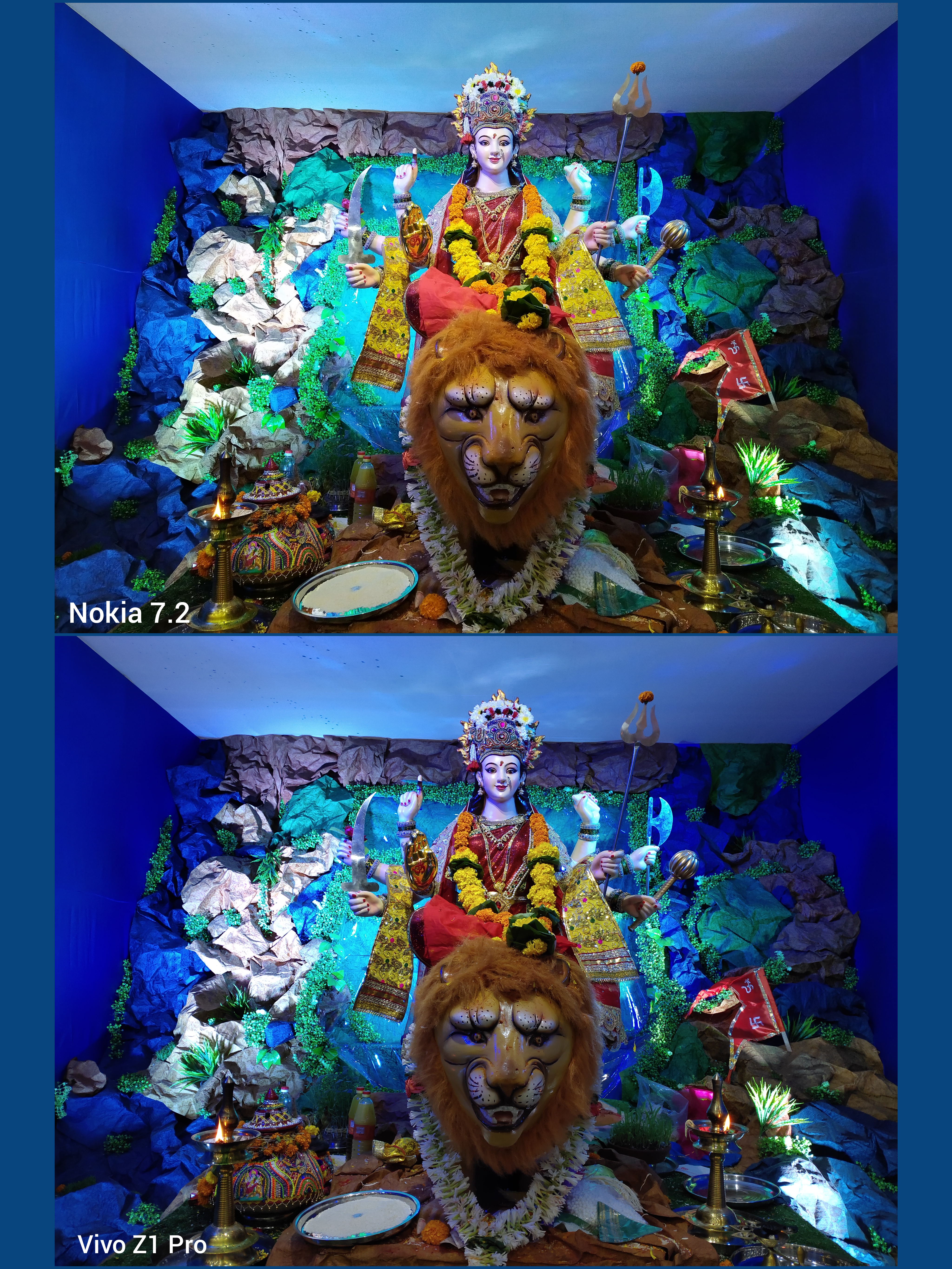 As you might have noticed, the image from the Nokia 7.2 is colourful and also warm where required and also keeps the blue shade coming from the LED focus lamps intact in places like the background and the walls. The hair and face of the lion, the face of the idol (Maa Durga) looks much better in the image taken from Nokia as compared to the image from Vivo Z1 Pro. Nokia 7.2 preserves a lot of details in such harsh conditions. More on this below:

I cropped both the images to the same level and you will now see the details preserved by the Nokia 7.2. The design on the Garba (clay pot behind the lamp) is much clearer in the image taken from Nokia 7.2 and one can easily identify the image of Maa Durga on the Garba. I noticed that the structure of the image is boosted a bit to improve the details. Coming to the colour you can get an idea by looking at the flame of the diya (lamp) in both the images. I feel the warmer tone of the Nokia 7.2 does justice to the copper lamp as well as the flame. 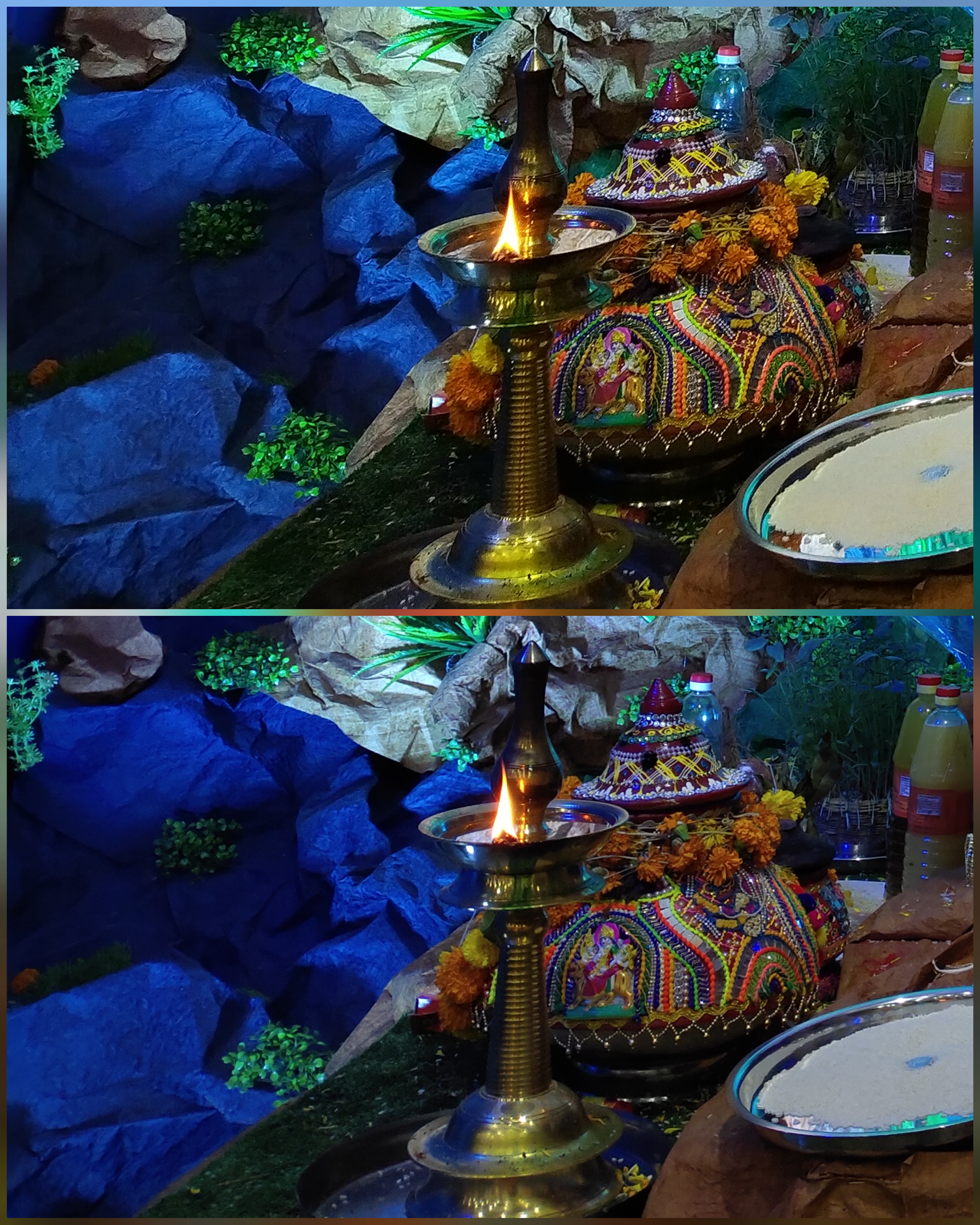 Marigold. An important and sacred part of Navratri and Dusshera. You will find this flower on every street during the festive season. I captured these images under direct sunlight and the shadows you see are of the tree branches. I don't see much difference in these two images except that the Vivo Z1 Pro captured a bit darker image as compared to the Nokia 7.2. The flowers look good in both the images. 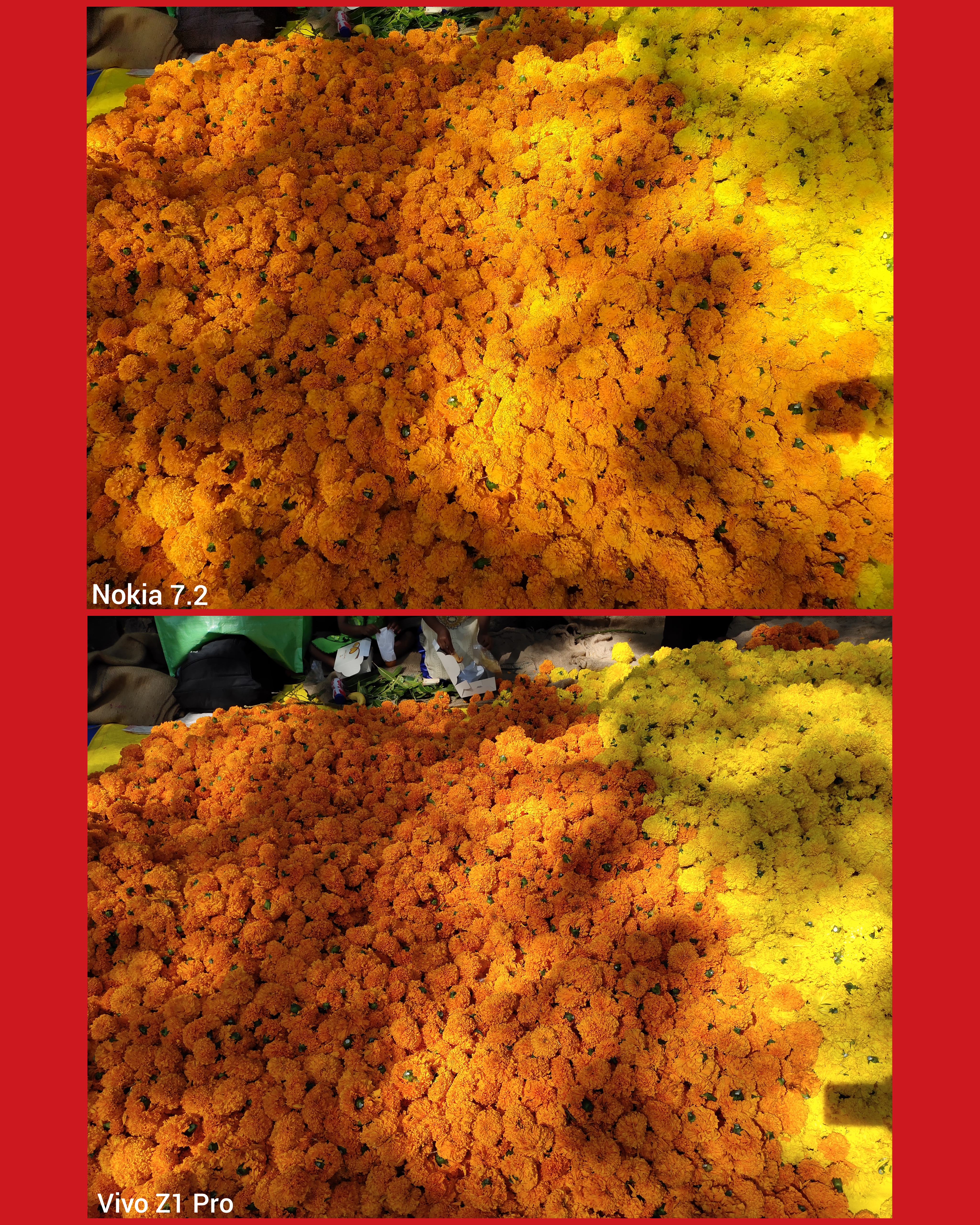 I did a bit of pixel peeping and noticed that the 12MP image from Nokia 7.2 preserves more details in the shadow areas compared to the Vivo Z1 Pro. This could be due to the pixel binning technique that combines the data from 4 pixel to form one superpixel. You can check out the crops below. 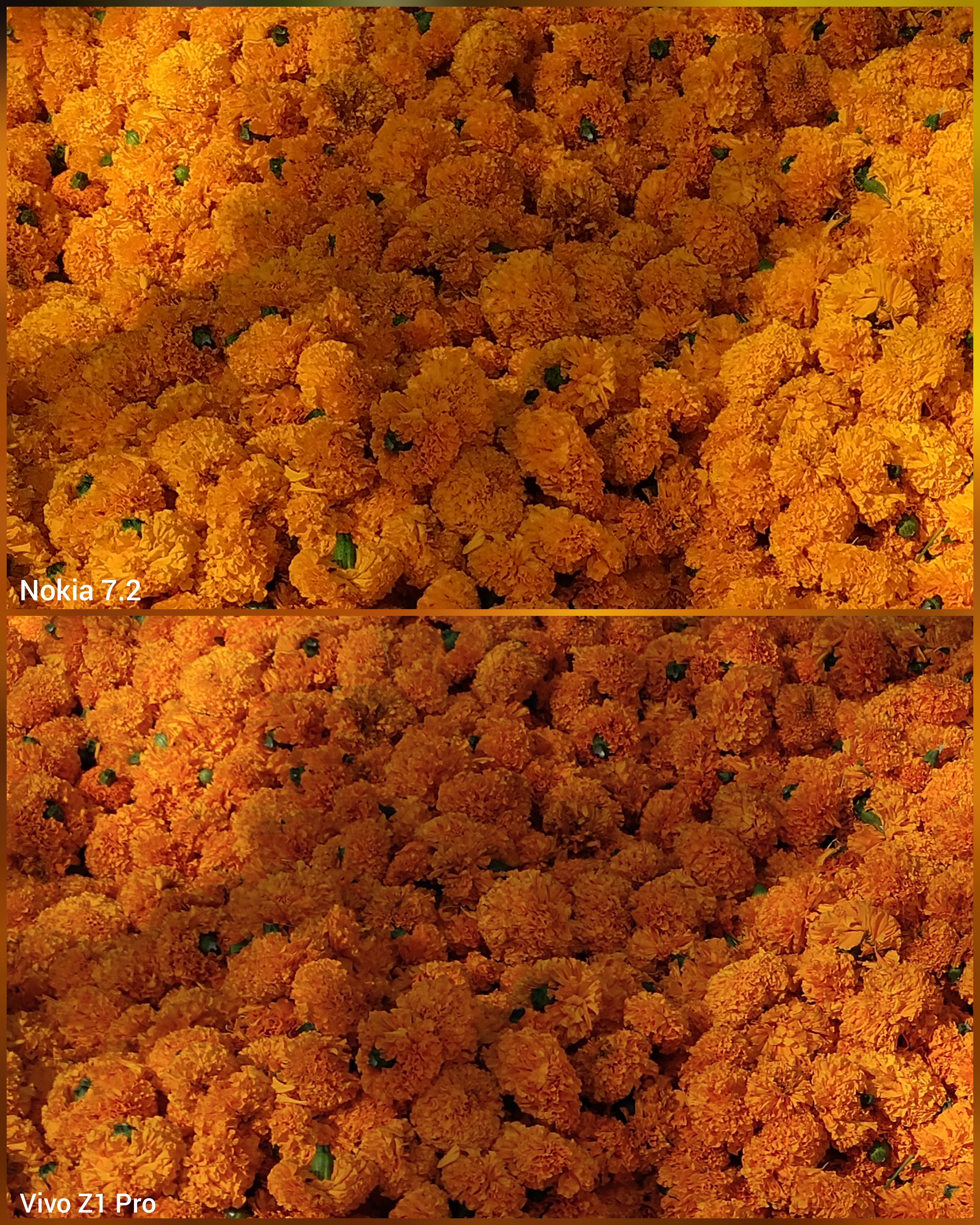 So, this image is the same as the Sample 1 but I captured this in portrait orientation. Again, you will notice the cooler colour tone in the image taken from Vivo Z1 Pro. The image from Nokia 7.2 looks vibrant at first glance and captures the attention. 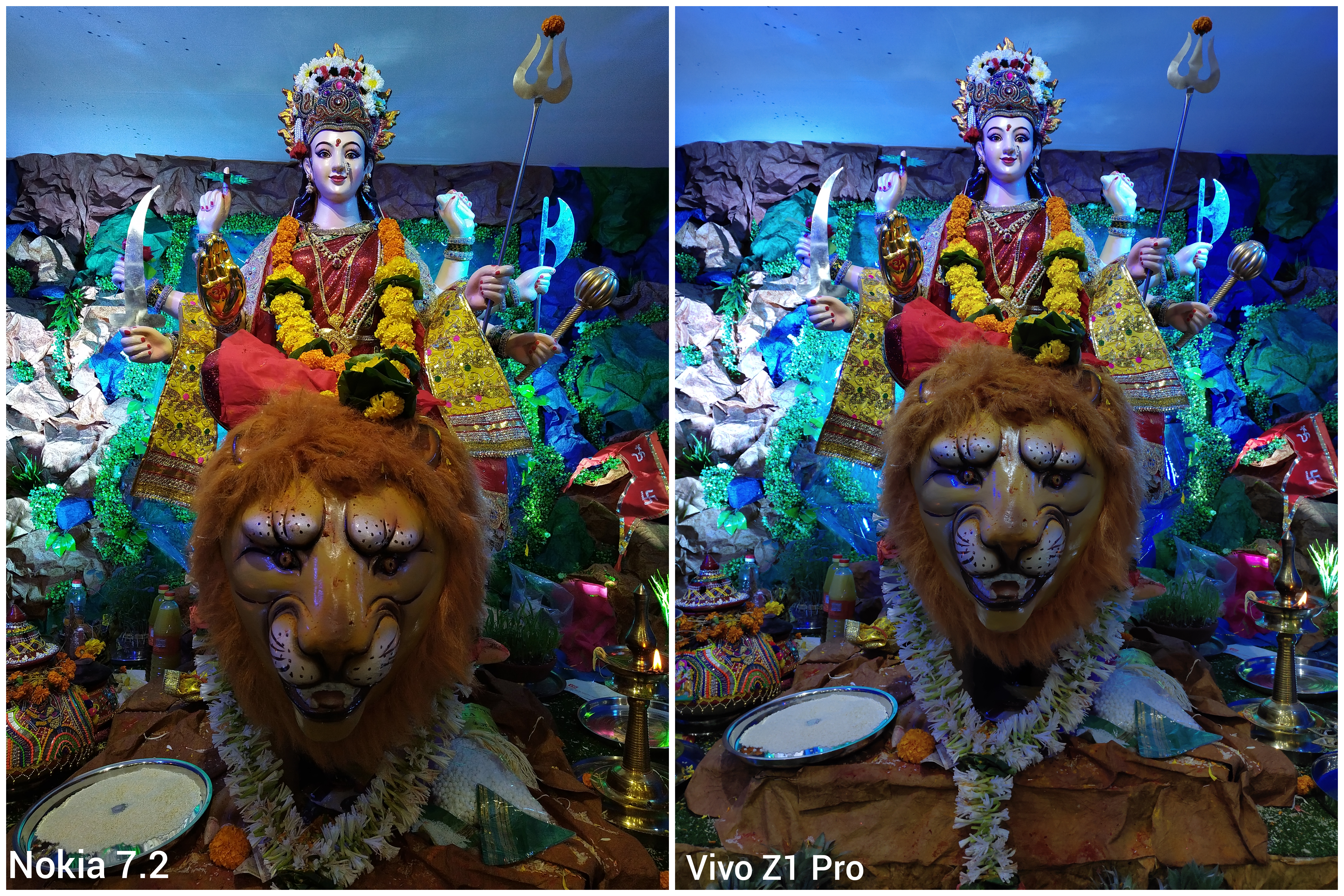 I again cropped the image. Now, Look at the hands of the idol. Nokia 7.2 has controlled the exposure preserving the details and colour of the hands. Also, different weapons in hands of Maa Durga look much cleaner even after zooming in. Look at the Trishul's arm which has preserved the design details going around it along with the colour at the top. Also, the Gadda and its arm are full of amazing details. Nokia 7.2 definitely performed better than the Vivo Z1 pro. 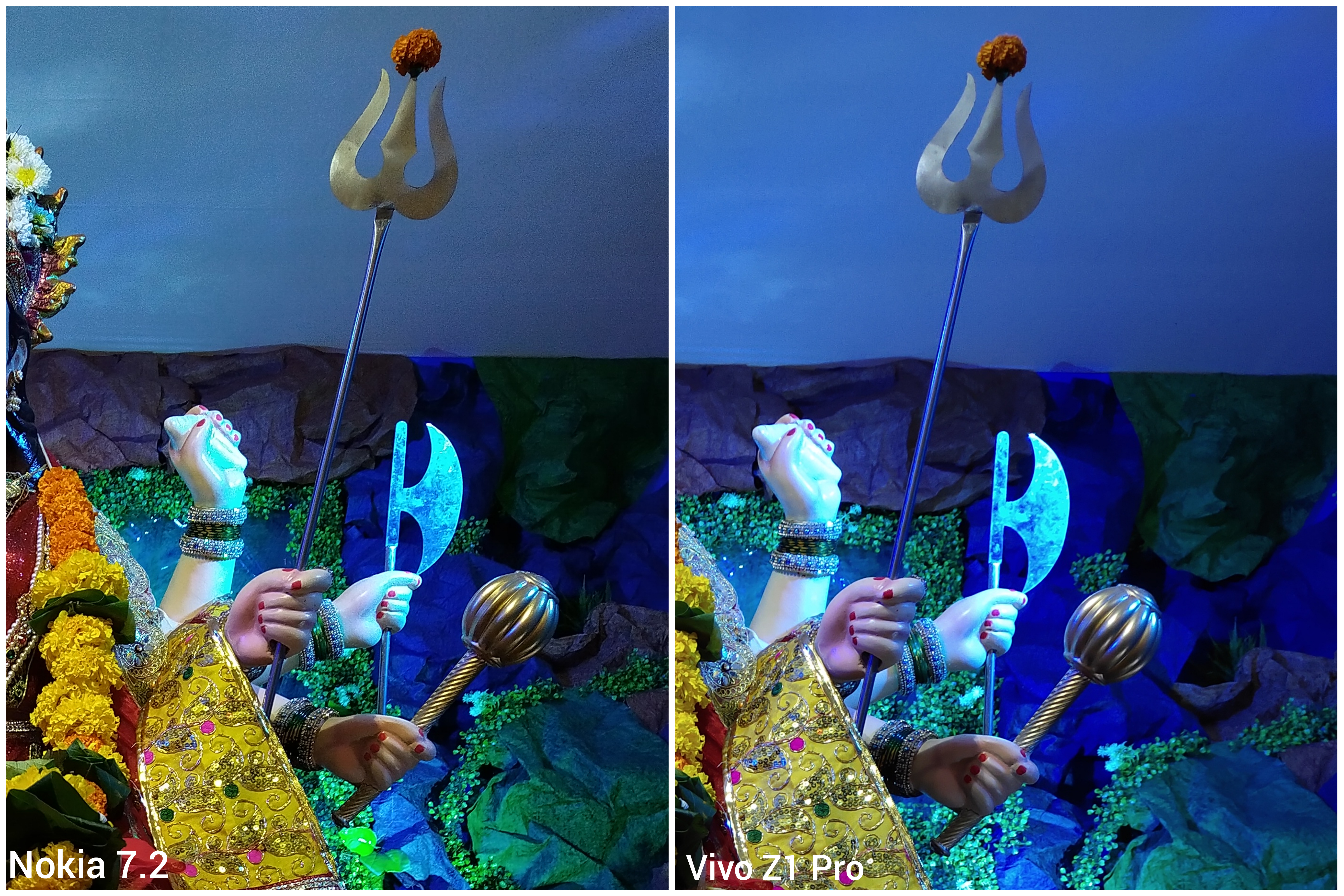 So, these were the few images I was able to capture with both the phones. If I get to capture more with both phones then I'll share them in the comments or at least try to share more images taken from the Nokia 7.2.