I am not a heavy user of the night mode feature on current smartphones but this neat feature can help normal users get bright and clear images during night time without having to play with different settings in the Pro Mode.

Kartik Gada
Super User  /  October 2019
I am not a heavy user of the night mode feature on current smartphones but this neat feature can help normal users get bright and clear images during night time without having to play with different settings in the Pro Mode. Also, the Pro Mode requires a tripod and with a dedicated Night Mode you can capture bright images of your gang without a need of a tripod which makes this a much handy feature.

Here are some quick comparison shots captured using the Night Mode on Nokia 7.2 and the Vivo Z1 Pro.

In this image, both Nokia 7.2 and the Vivo Z1 Pro have kind of blurred the trees that are far behind. The leaves on the right and in the centre appear much clearer on the Nokia 7.2. The leaves at the centre in the images taken by Vivo look washed out. Overall, the image taken from Nokia 7.2 looks much balanced. 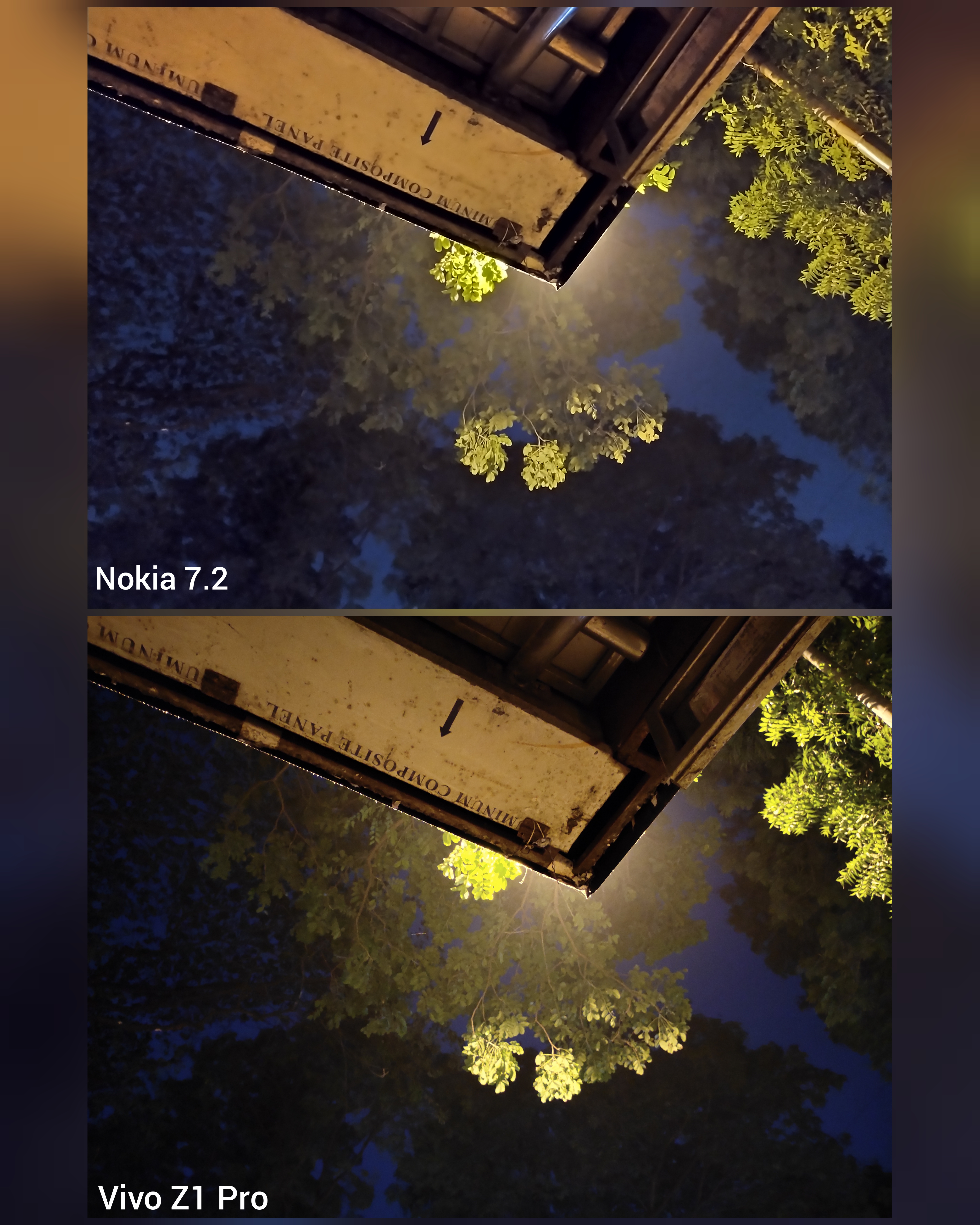 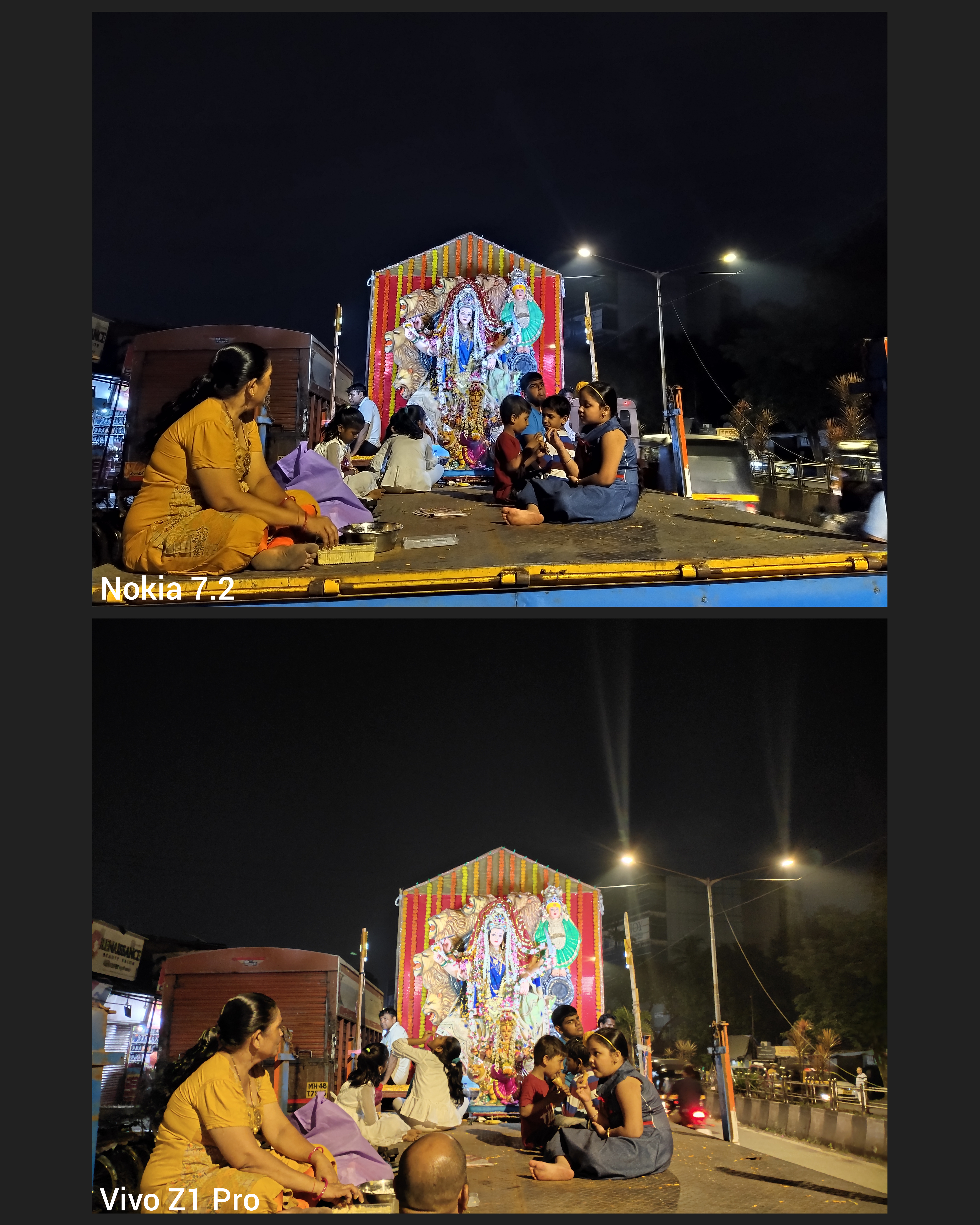 This is a difficult image to judge as both phones did better but Nokia 7.2 shines when it comes to bringing out the minute details. ZOOM IN on the front board of the stall and you can clearly read what's written below Ice Breakers inside the circle on the image taken from Nokia 7.2. Whereas, image from Vivo does too much of softening reducing the sharpness to an extent that it is very difficult to read the minute text. 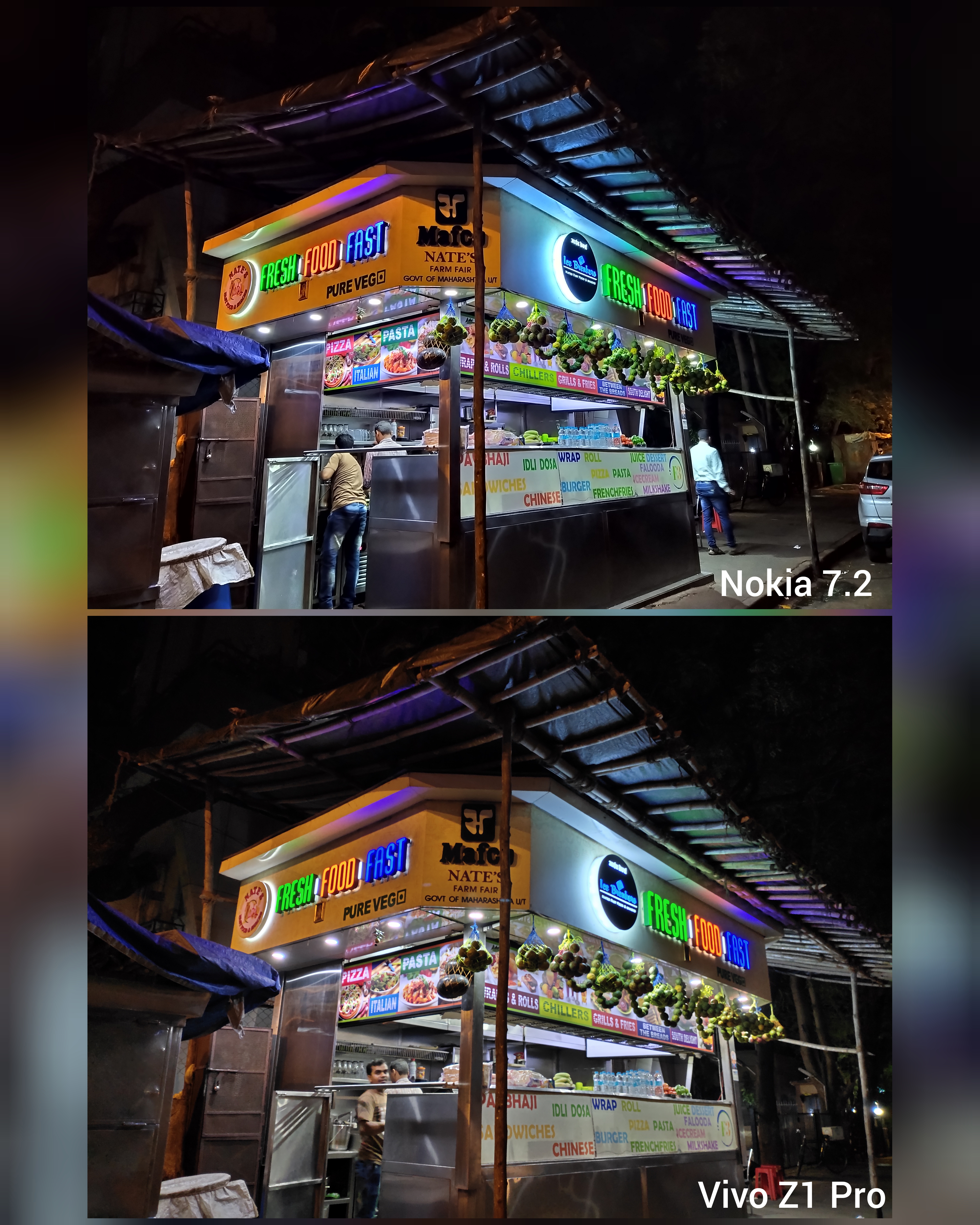 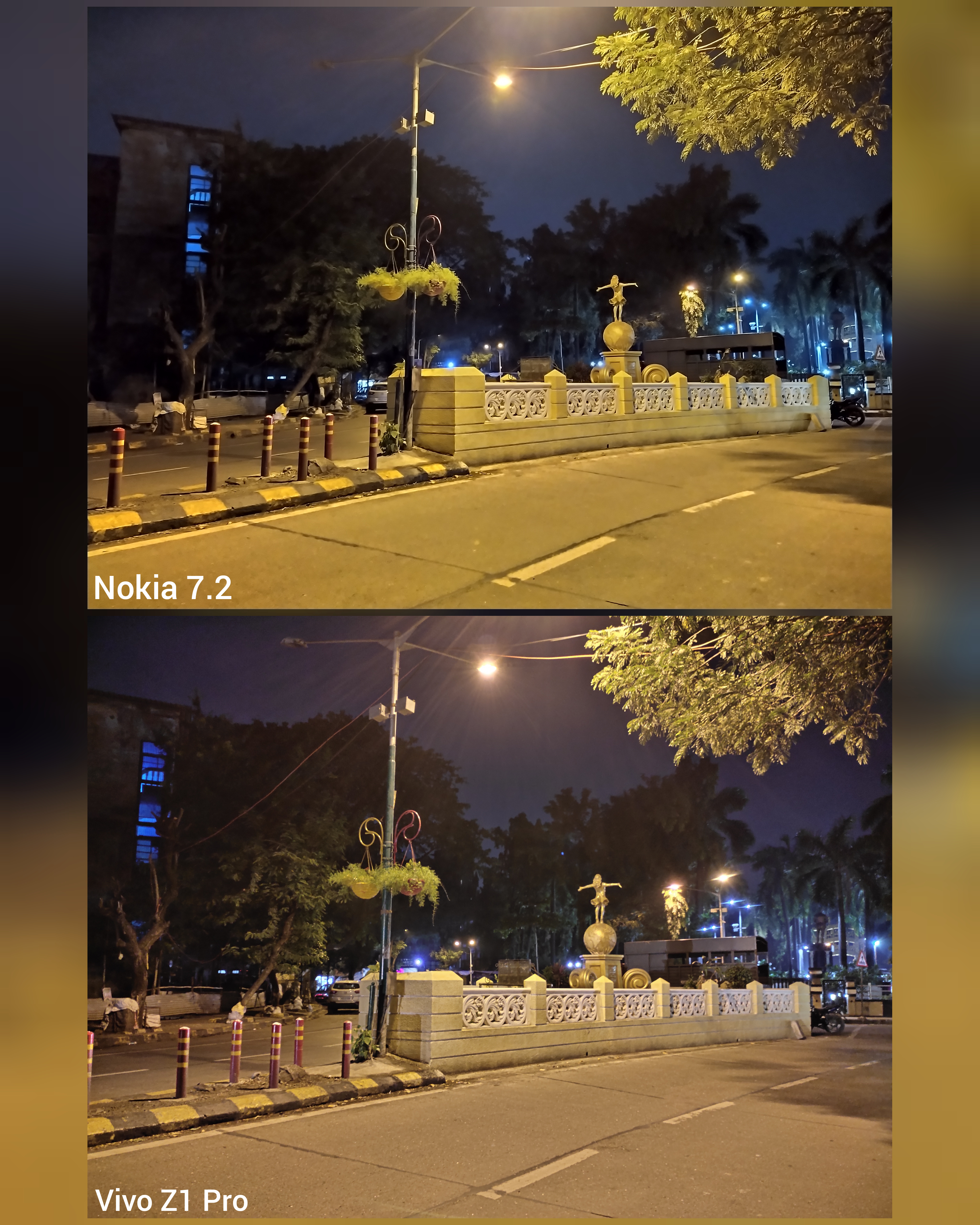 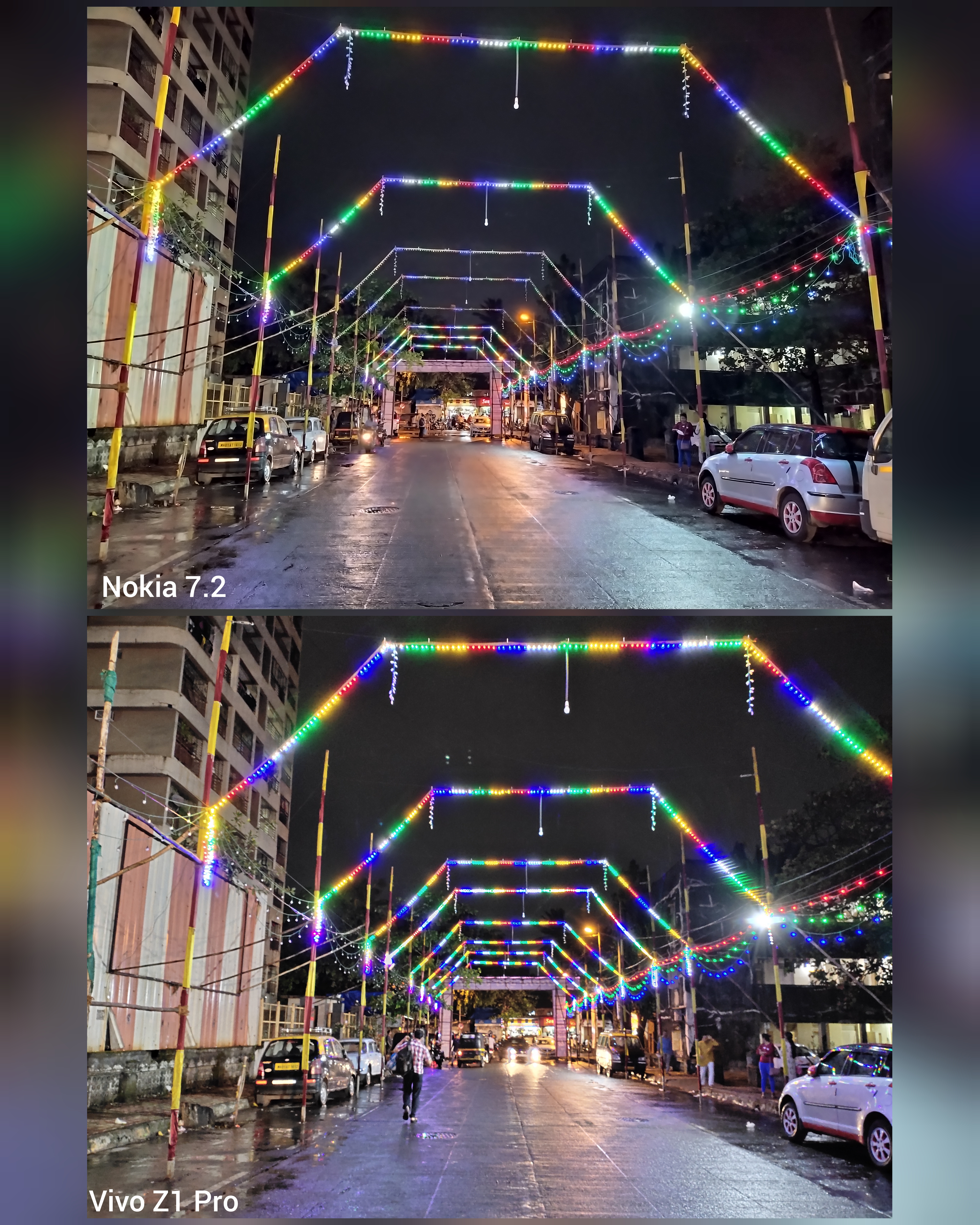 Night Mode can be very helpful in the normal evening time lighting conditions when you are out with your friends. You can click some really bright shots but you have to keep your hands steady till the phone captures all the frames. Night mode captures multiple images with a combination of High ISO and Low ISO shots and fuses them together to produce the final image. In the case of Nokia 7.2, it is capable of capturing up to 20 frames when mounted on a tripod.

Night modes on mid-range smartphones cannot match the quality of GCam which has loads of data and AI stuff at its disposal. So, there is always room for improvements and Nokia Mobile can further improve it and try to bring it as close to GCam as possible in terms of quality.

So, these were some Night Mode comparison images showing the low light capabilities of the Nokia 7.2 as compared to the competition. I hope you all liked it.