Camera setups of modern smartphones come with a dedicated depth sensor which helps in separating the subject from the background by blurring the background thus giving a feeling of depth.

Camera setups of modern smartphones come with a dedicated depth sensor which helps in separating the subject from the background by blurring the background thus giving a feeling of depth. However, this is still a hit or miss on most mid range smartphones. Nokia 7.2 also comes with a dedicated depth sensor and I compared it with the Vivo Z1 Pro. The results are just amazing and I would say right away that Nokia 7.2 wins in this comparison.

Note: The leaves on the top left edge aren't blurred because the tree was just beside the subject which brings them both in same line of focus. 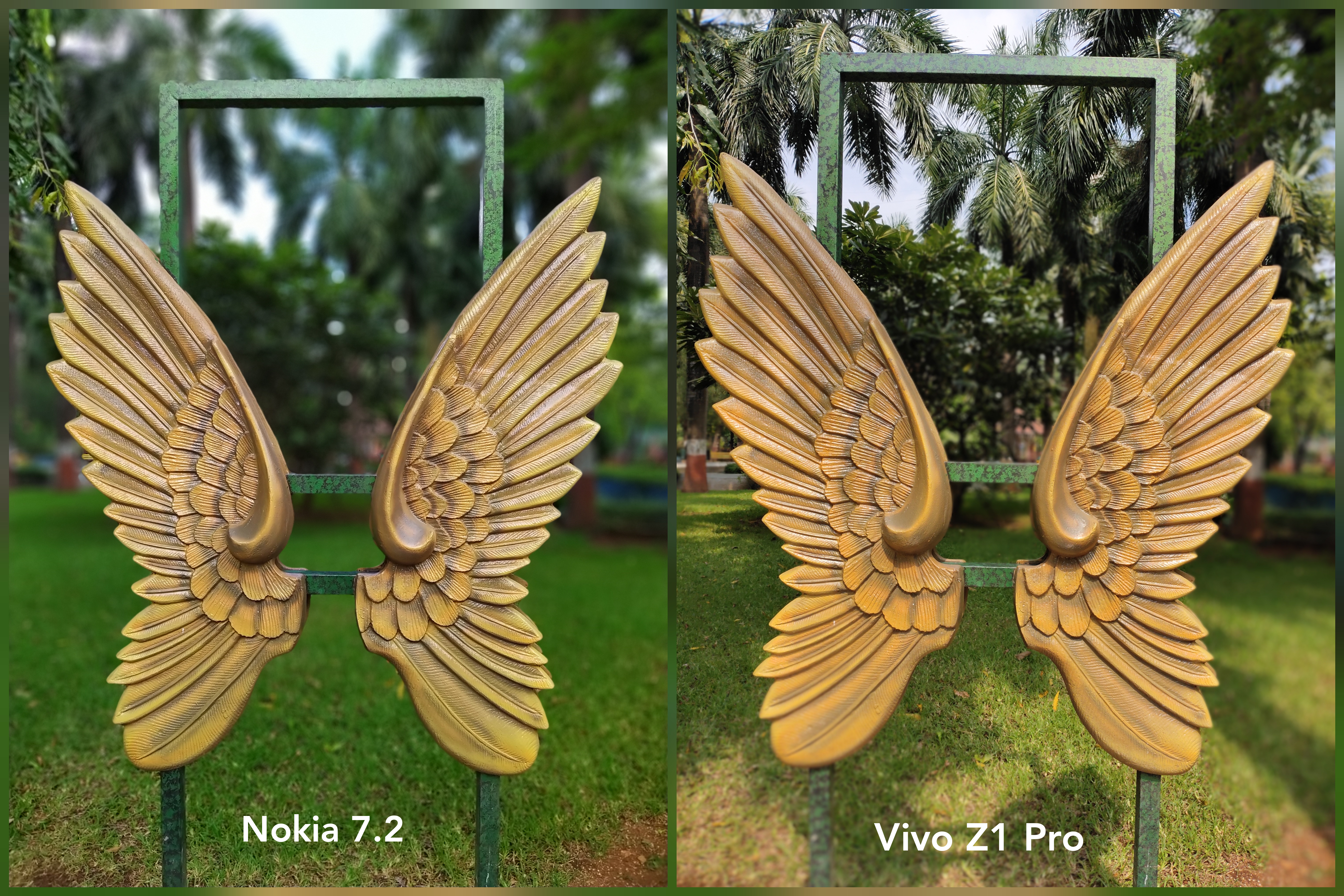 A similar kind of subject but with a bit more complex background. Here again Nokia 7.2 performs better by accurately blurring the background and keeping the subject in focus. Vivo Z1 Pro on other hand just blurs a few areas in the image which is uneven and looks unnatural. 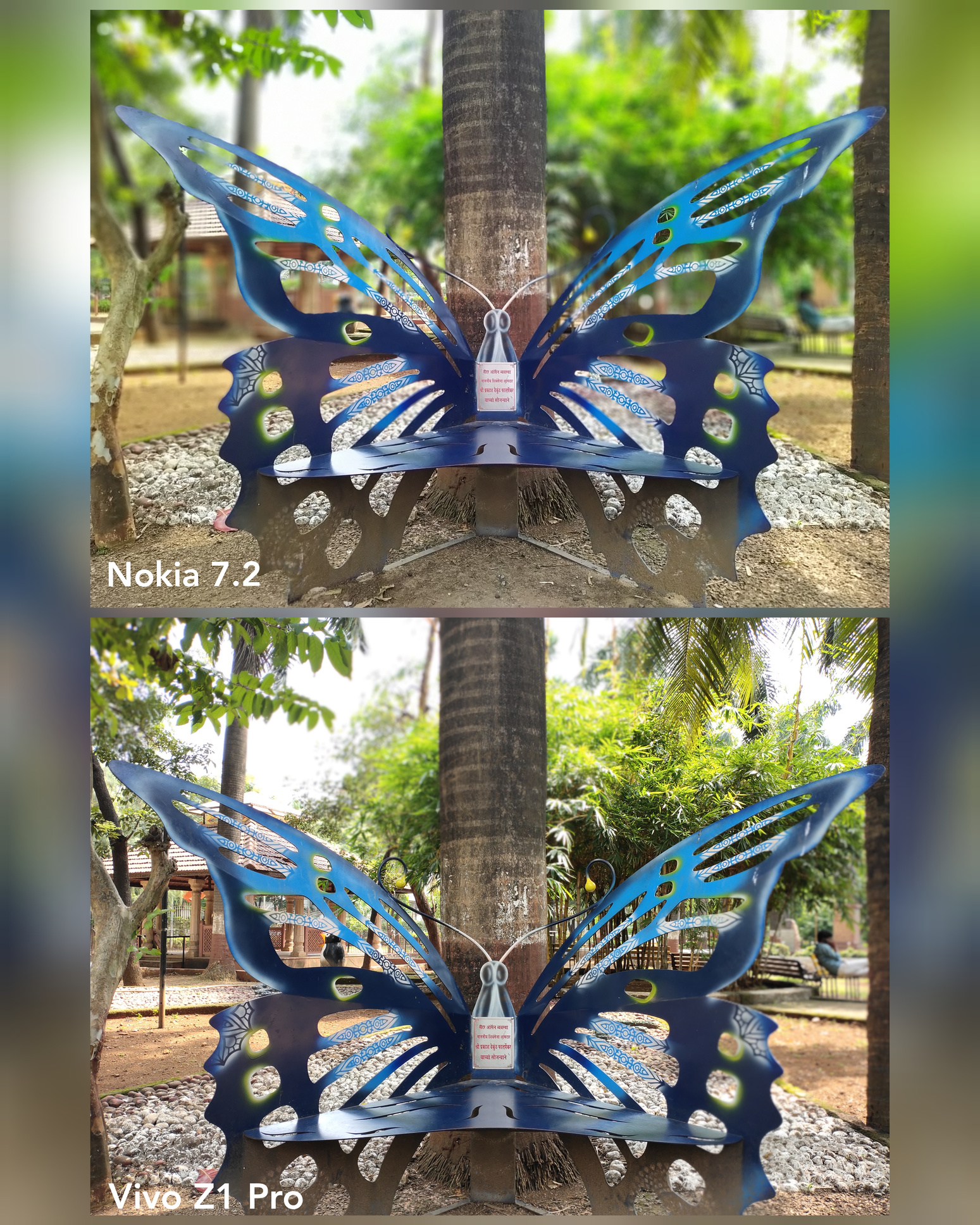 In this image you can see the blur in image shot on Nokia 7.2 increasing gradually which looks natural. The stone with the info is well in focus in the image taken with Nokia 7.2. Also, the blur is well balanced in the entire image unlike Vivo Z1 Pro which has applied blur effect where it shouldn't (see the face carving on the stone). Nokia 7.2 image instantly looks better compared to Vivo Z1 Pro's image.

Sorry for this "USE ME" dustbin photo.😆

This is an easy subject. Look at the edge detection here. Nokia 7.2 is sharp and much accurate compared to the Vivo Z1 Pro which makes the edges way to soft which doesn't look good. 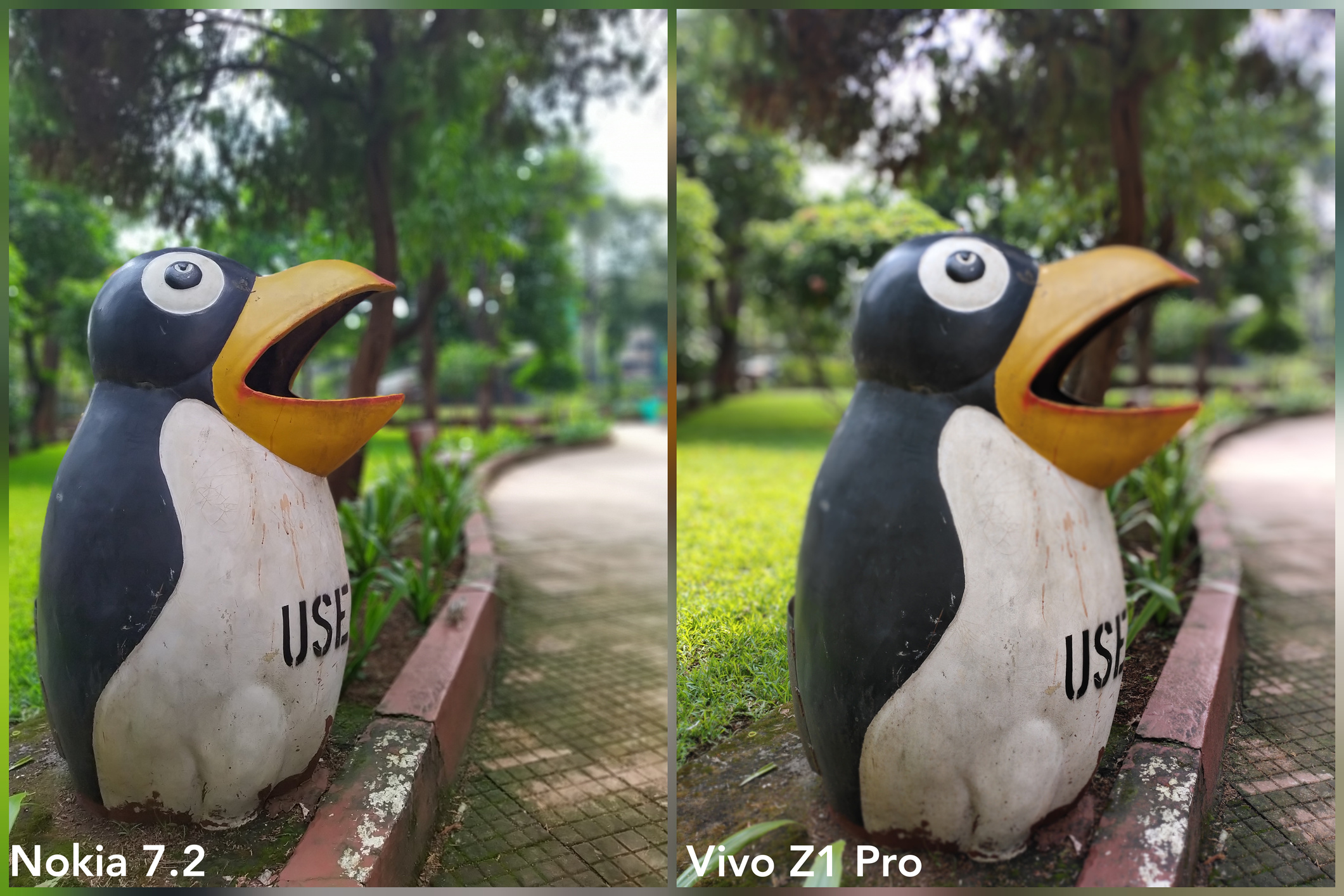 Another easy but tricky shot due to the mirror finish back of the Nokia 9 PureView. Easy because this is a close up shot which would require less calculations for both the phones to detect edges and apply perfect blur. But as you can see Vivo Z1 Pro looks confused and has also blurred out parts of the Nokia 9 PureView's Penta camera setup and ZEISS logo. Nokia 7.2 on other hand has produced an amazing image. 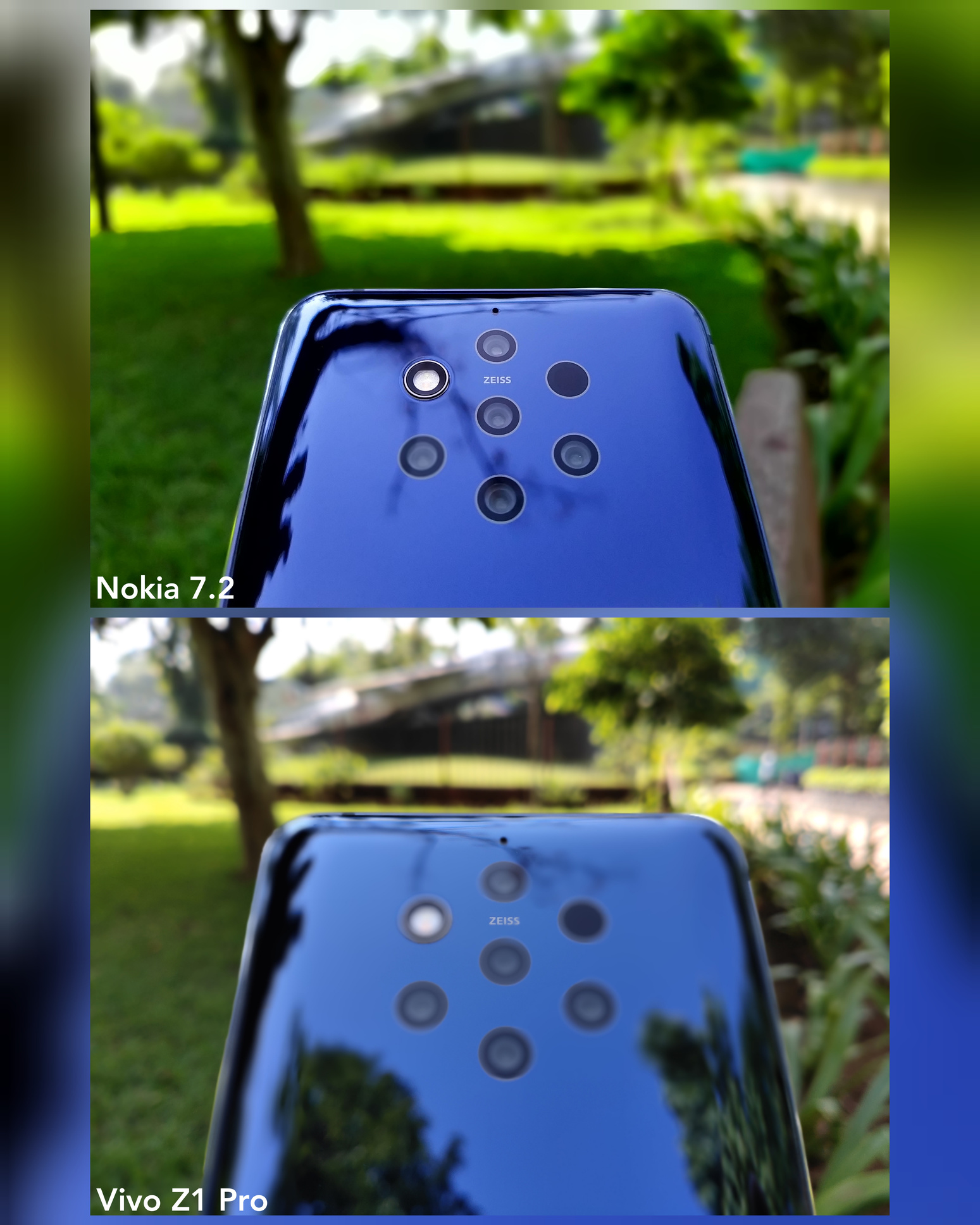 This is the image where Vivo Z1 Pro came much close to Nokia 7.2 but still it fails due to the softer edges all around the subject (tree trunk). Also, the exposure has taken a hit in the image taken by Vivo Z1 Pro. The image is way to bright than it should be and some areas are just white with no details. For example: look at the stones on the ground and you will instantly notice that Nokia 7.2 has done a better job. 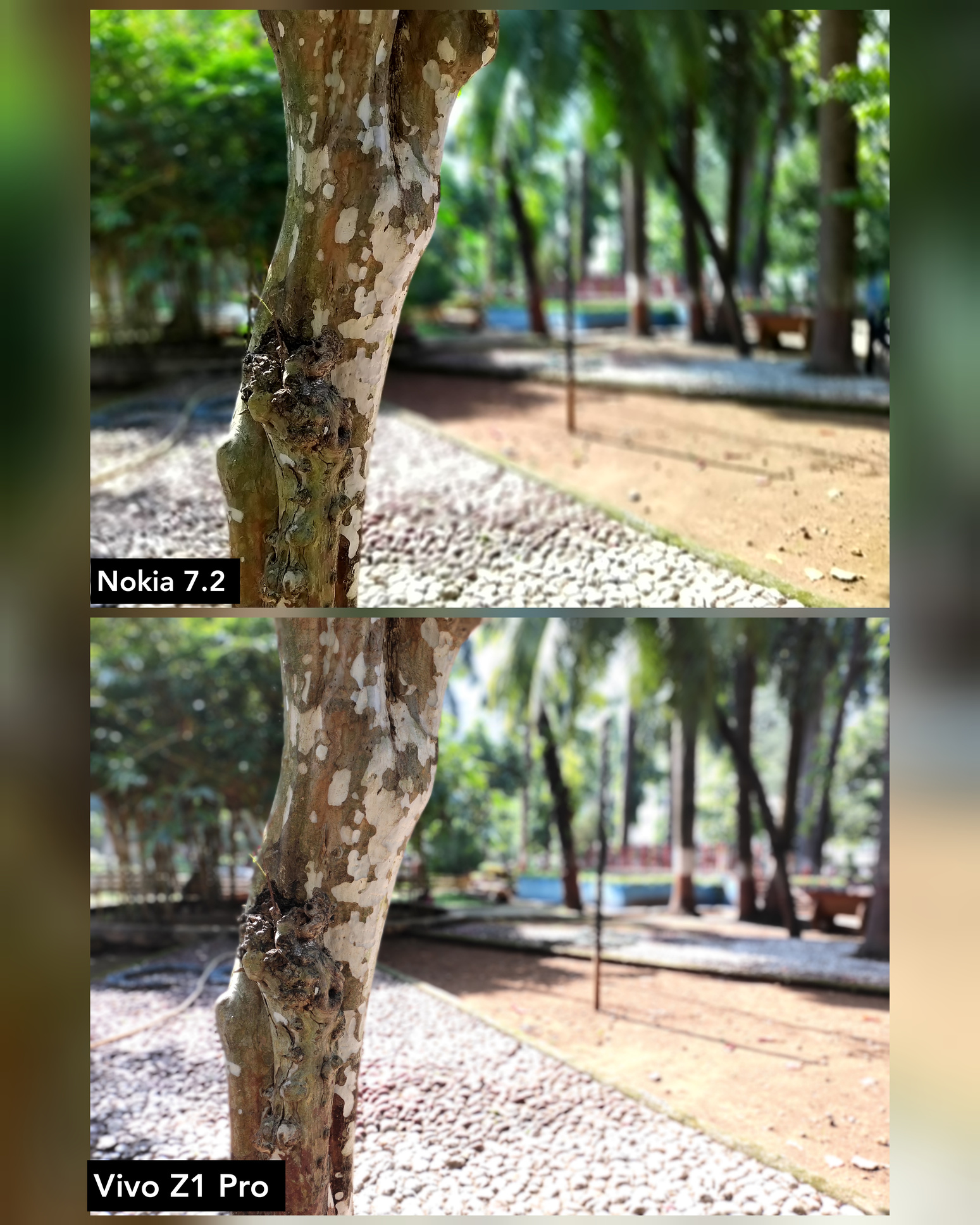 This is the toughest frame for a smartphone camera to handle and I would say Nokia 7.2 did an incredible job. The bench, small plants and the tree are all in focus. The bbokeh effect slowly increases blurring the background. Vivo Z1 Pro again messes up and you can see no blur applied on the left side of the image as well as behind the tree. 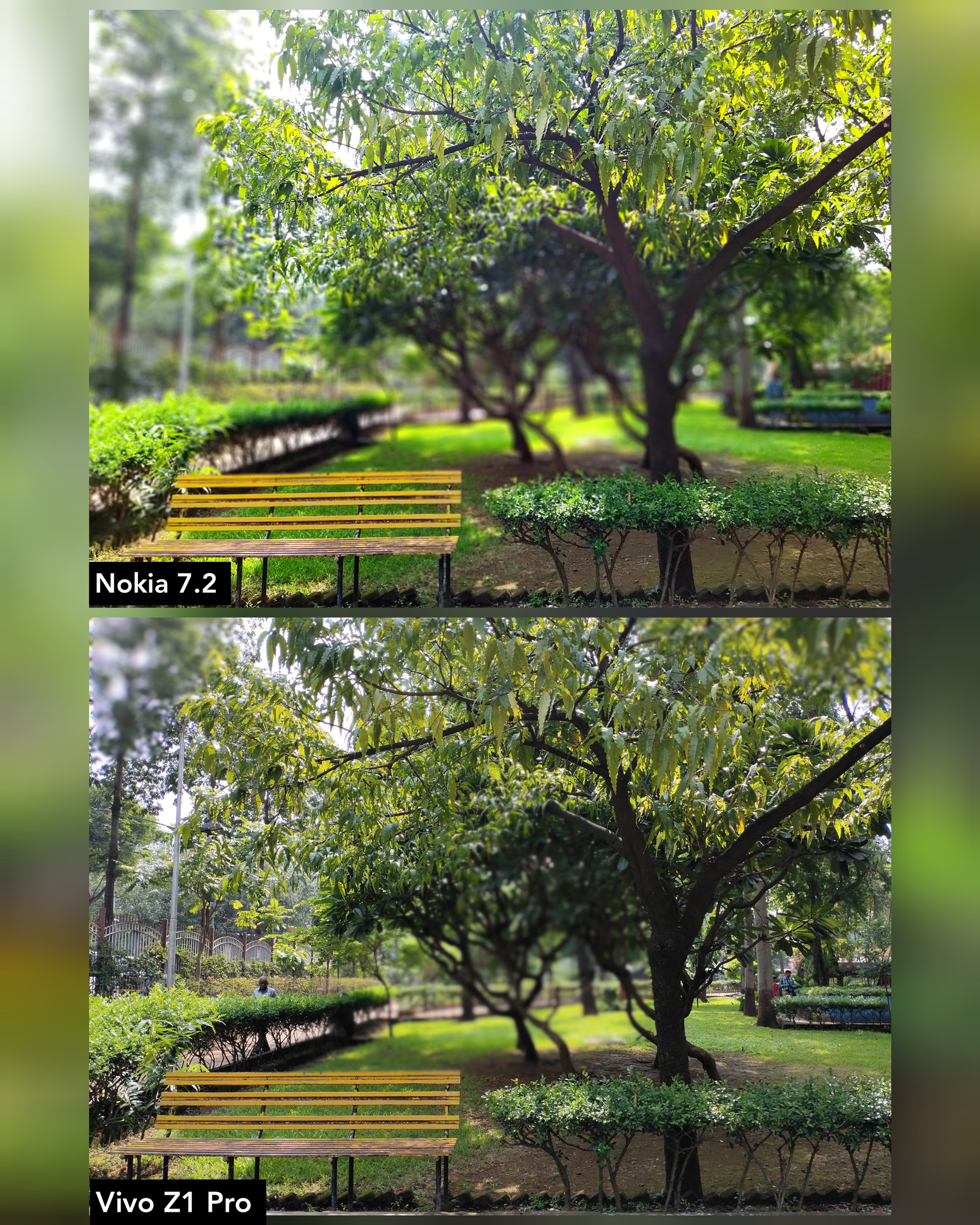 The easiest shot. Viivo Z1 Pro once again fails to apply blur correctly and also blurs some parts of the focus area. Nokia 7.2 on other hand produces an amazing result. 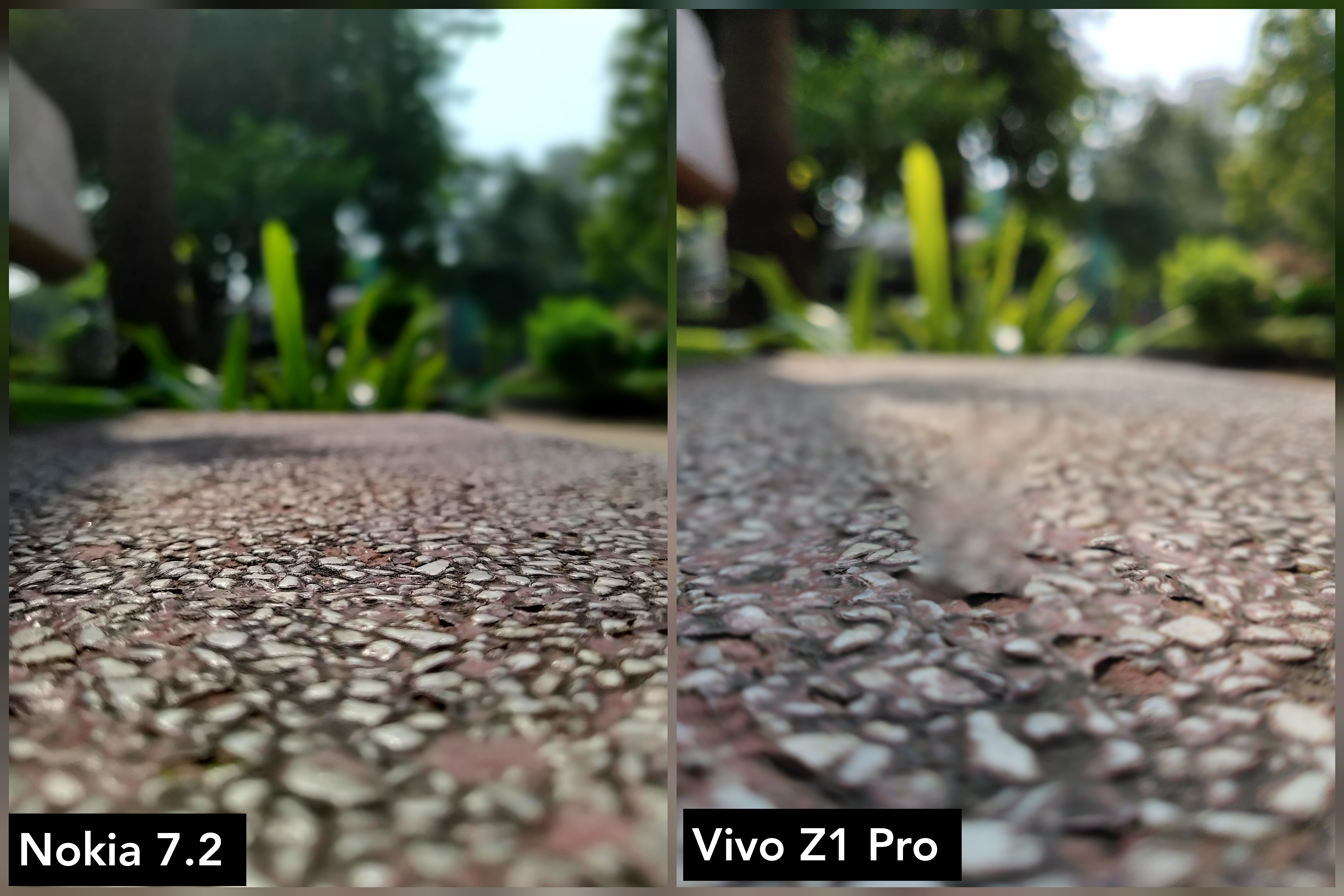 I can say that Portrait Mode on Nokia 7.2 is amazing and does an incredible job at this price point. Nokia Mobile and ZEISS have worked together to bring some more Portrait/Bokeh effects which can be applied even after the image is taken. Portrait Mode is easily one of the strongest plus points of the Nokia 7.2. I have done a few more camera comparisons between these two devices which you can check out by visiting the links below. 😊