Which phone can take better sunset time photos? Nokia 7.2 vs Samsung Galaxy A50

I pushed the Nokia 7.2 to the next test. This time against a setting down sun. The capture becomes a little difficult owing to a reduction in light.

Which phone can take better sunset time photos? Nokia 7.2 vs Samsung Galaxy A50

I pushed the Nokia 7.2 to the next test. This time against a setting down sun. The capture becomes a little difficult owing to a reduction in light.

All shots are original as they came from the either phone. I haven't done any post-edits, re-takes or any tampering.

Straight off a highway while I was on my bicycle, the Nokia 7.2 has done better over all. The Samsung A50 brightened up the sky while darkening the trees. The Nokia 7.2 has balanced the scene by still keeping trees visible instead of making a black spot.

I kinda prefer the sky from the Samsung since it is brighter. But that's probably the farthest from reality given it was quite cloudy. 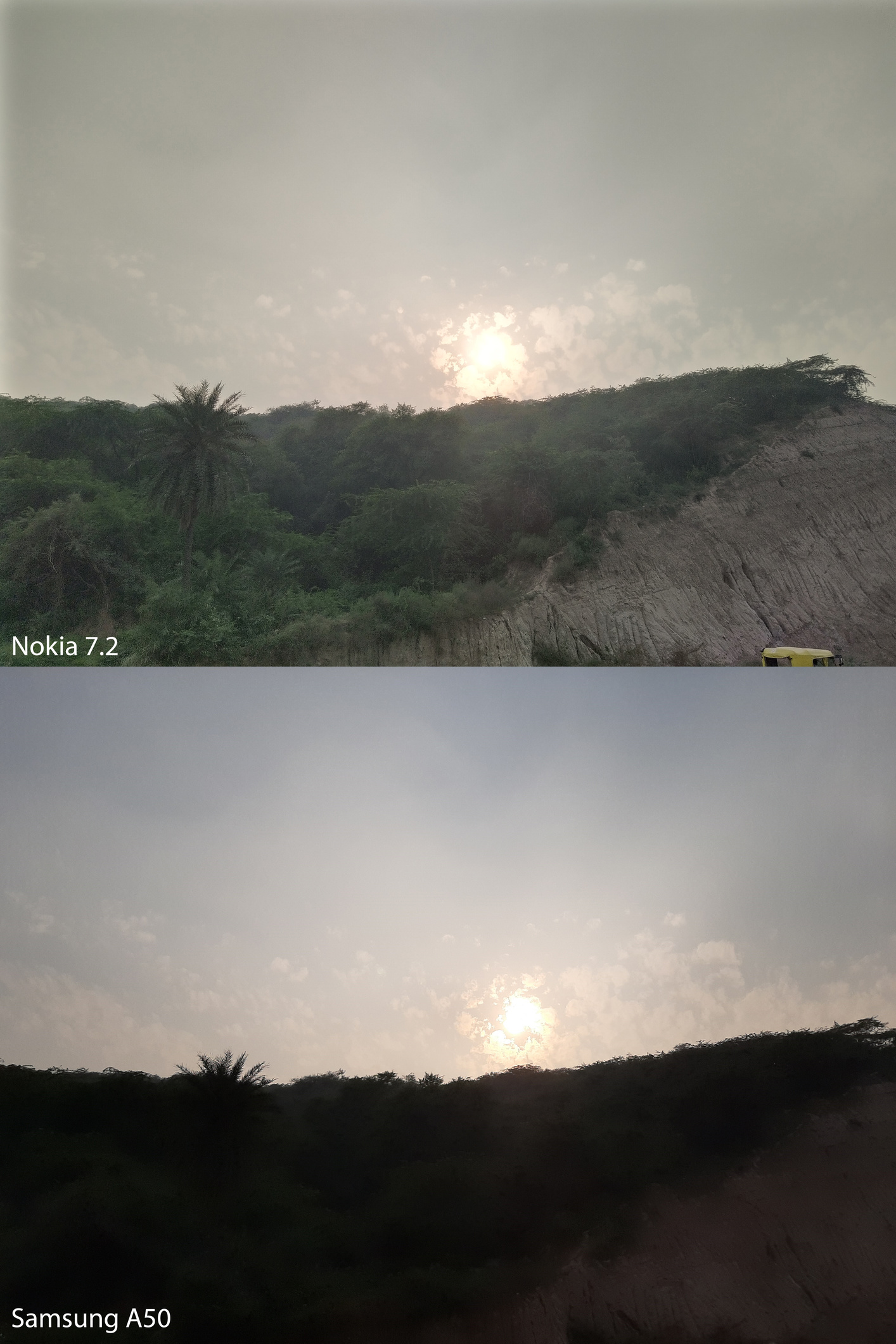 I shot it from the other side of this small hill. I am not delighted by the photo from the Nokia 7.2, but if I look at the one from Samsung A50, the Nokia 7.2's output is way better. The Samsung kept nothing. forget the trees, it even more or less blurred the sand which was exposed when the hill was trimmed to make way for a wider highway. 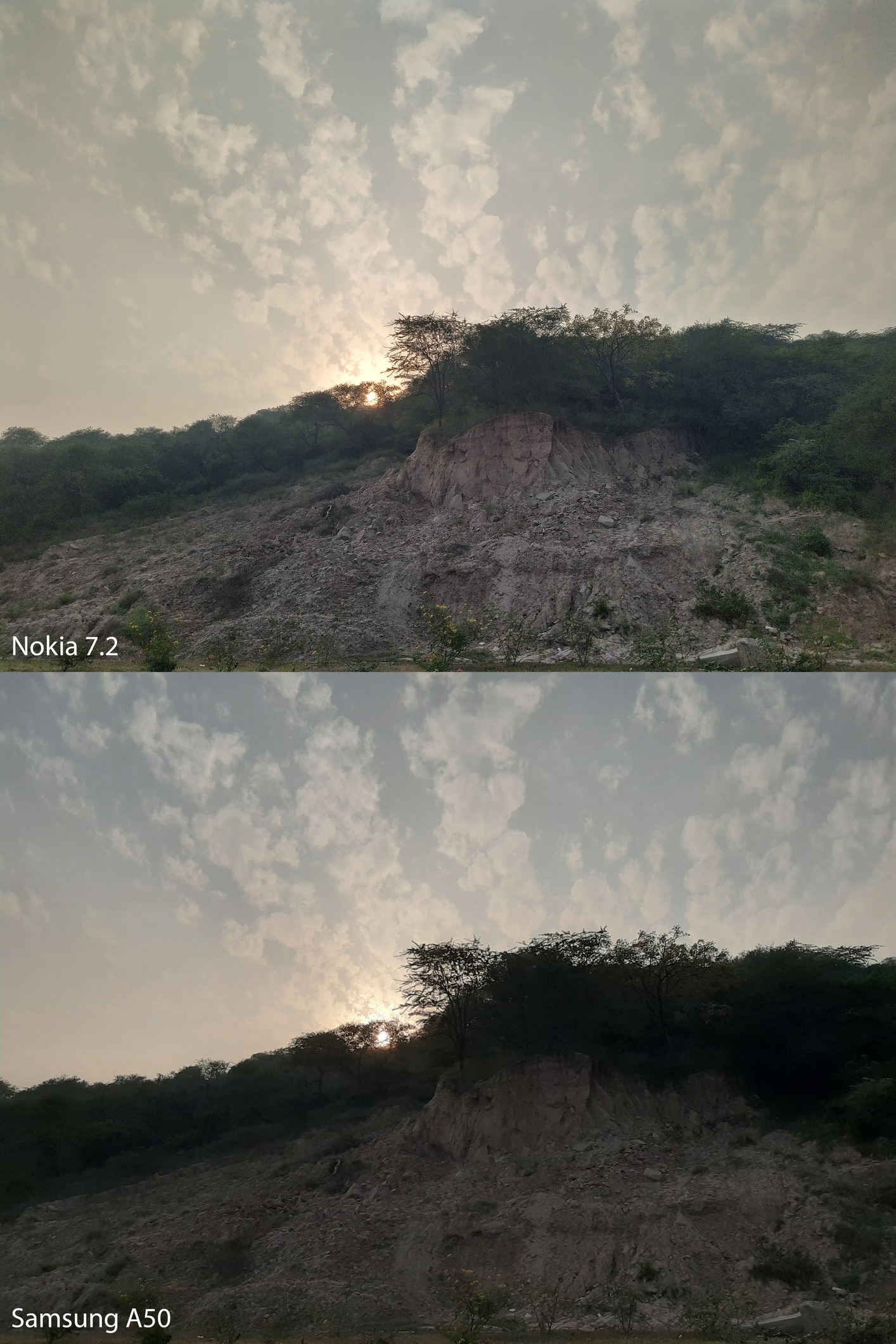 Another shot from the same side of the hill, just a little farther. The results are similar. The Nokia 7.2 has produced a much better scene overall. The greenery is visible, so is the body of the hill and the sun and its light spread across the clouds.

Also, the yellow flowers at the very front of the image have some information available. The Samsung has completely missed the scene. 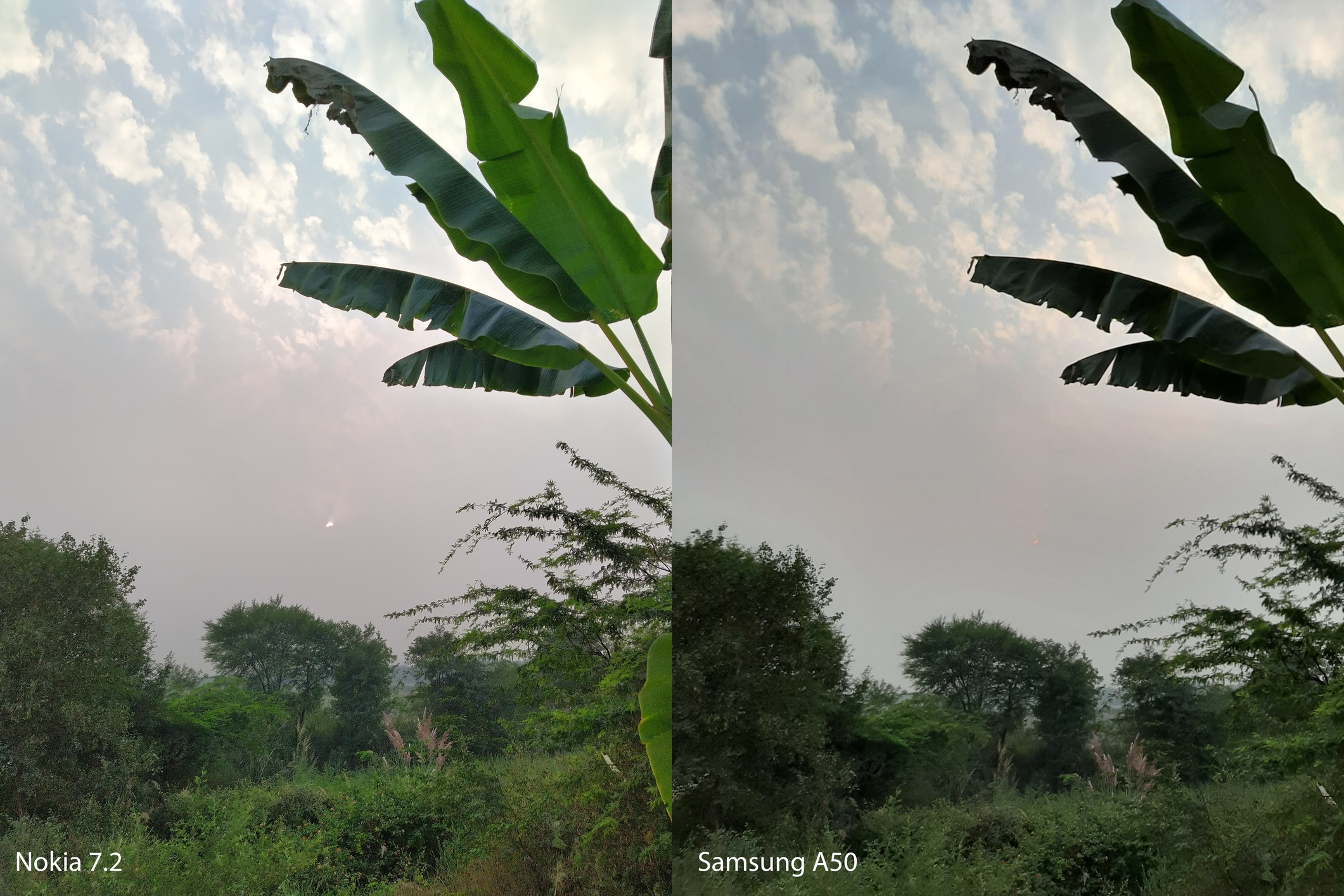 This was just when the sun nearly disappeared. The Nokia 7.2's shot still has the small ball visible, whereas the clouds took it over by the time I switched to the Samsung A50. Both images look good to me. But for sharing, I'd prefer the one on from the 7.2. The light and the details of the leaf are better retained by the Nokia 7.2.

This was shot off a small extended piece of land into the small river Ghaggar. I like both of the images. The Nokia 7.2 seems to have applied a little bit of color addition, which is obviously liked by some people. The Samsung A50's output appears more natural to me. And I'd wanna go with the Samsung A50's shot, especially for the color of the roof of the shed.

A small mall with a setting down sun to its side, both phones did pretty well. The Nokia 7.2 however did it better overall. The Samsung started to make the building darker and also applied a bit of color addition which took it to a bit of unnatural side. 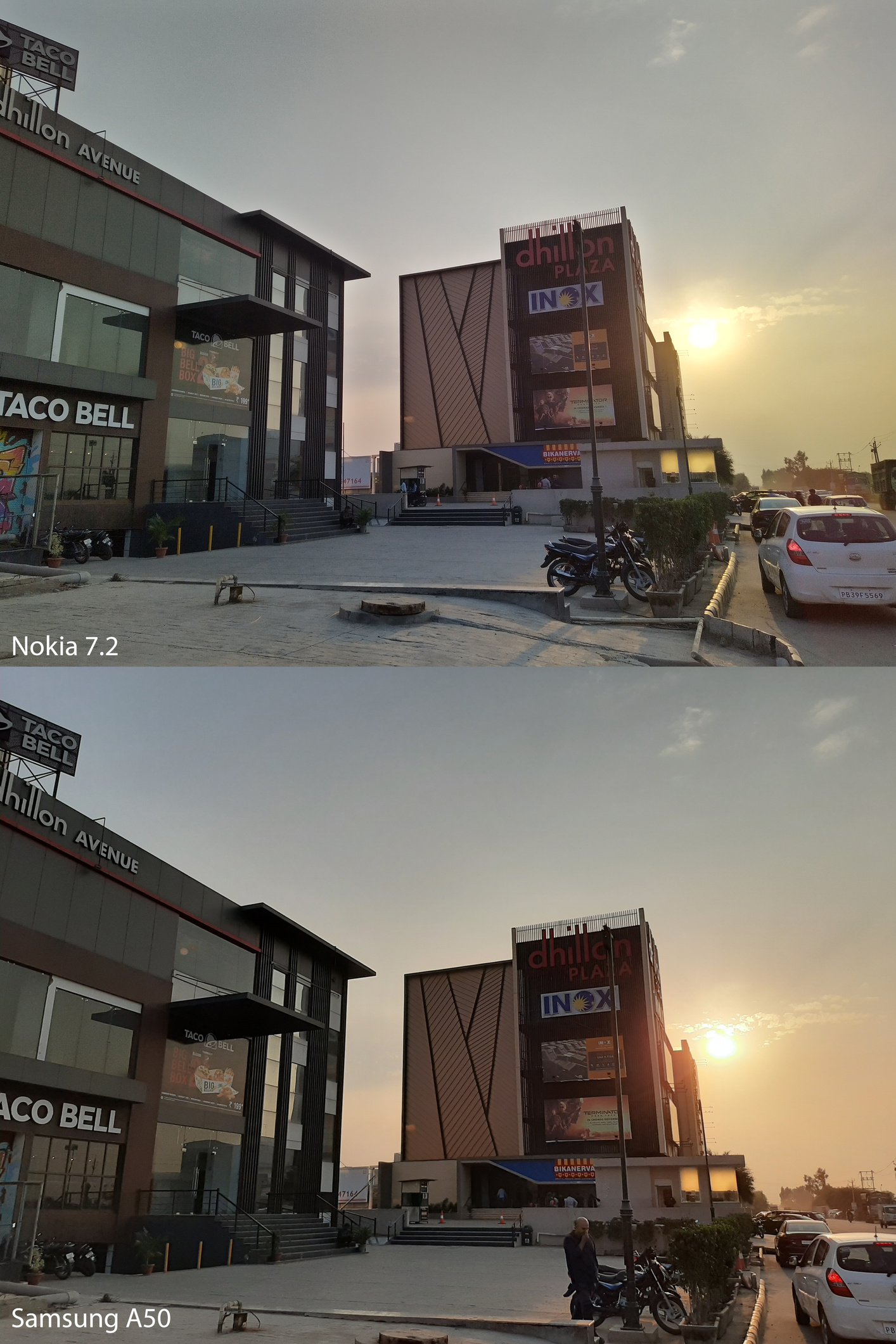 This scene got quite a lot of noise when clicked from both devices. The shot on the Nokia 7.2 has a little bit more details (for example, the pavement and the plants) than the Samsung A50. Although the margin is very thin and I can call it a balanced shot by both phones. It was really getting darker, so, some noise was expected. 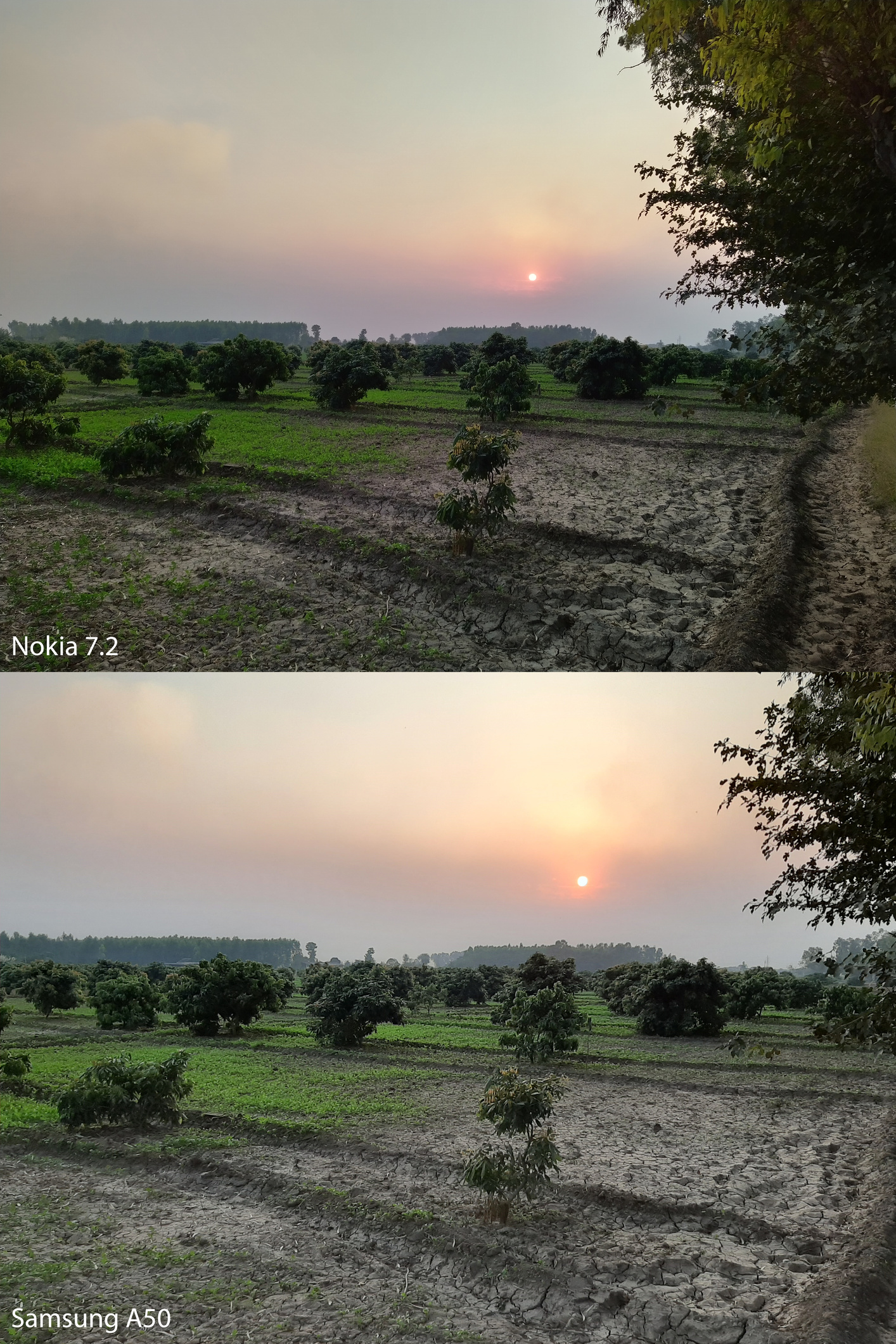 This is a farming land. There's nothing to talk about the image here, just more for the viewing. I like the scene created by the Nokia 7.2 over the Samsung Galaxy A50. That's probably due to the color management happening on the Nokia.

WHAT DO YOU THINK?

That was my opinion! What do you think of the images? Which ones do you think have turned out to be better? 😊